Ok, so I was going to leave things “as is” for a while to chew over my options wasn’t I? Well it’s the Easter long weekend and the better half and offspring are about 1500km away visiting her father so I have plenty of option chewing time available. I made contact with the Svengali of silos Keiran Ryan and he provided me with some footprint data for grain silos in 7mm/O-scale (1:43.5). I also had contact from Ian Phemister  who is building an HO version of Muswellbrook and Merriwa. I paid a visit to their blogs again. I even managed to do a Google search of wheat silos and found some photos of Merriwa’s silos. The photos below were sent to me by Keiran.

This photo from Keiran shows the Merriwa wheat silo from the rail side. 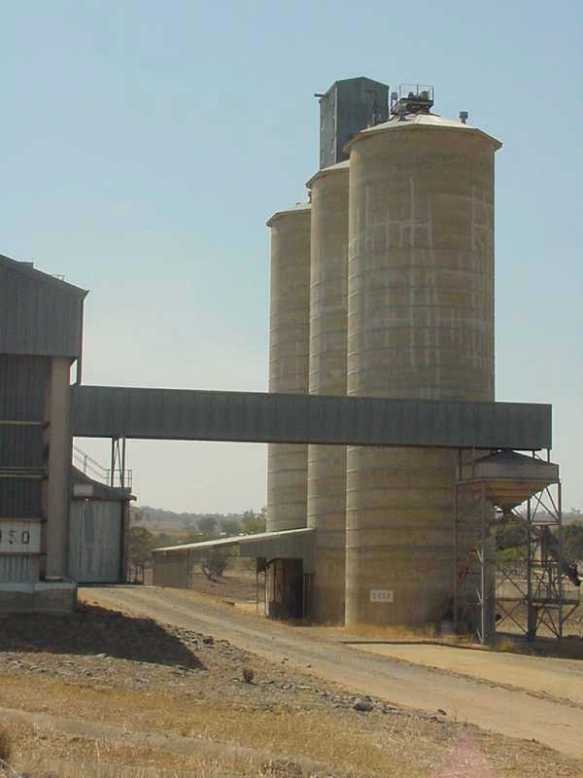 Another shot of the wheat silos at Merriwa from the other side this time.

I spent some time today transferring the footprint dimensions of the grain silo at Merriwa to the layout plan to see if I could get a prototype sized silo to fit in the yard. Keiran quipped that he wasn’t sure I’d have the space considering the restirctions my partner had imposed on me re the room size. At the same time he mentioned that he was in the process of developing a 7mm scale kit for a standard S008 NSW silo. He suggested that this might be a better option. See photo below:

This is a photo of an S008 silo I got from a Google search. It came from the Bolivia blog.

I’m not against the idea of swapping the silos at Merriwa from a model that closely follows the prototype to the smaller S008 variety, however I was considering an S008 for the loop at Myanbat. As there was no silo at the prototype Myambat it doesn’t really matter what type of silo appears there, but I don’t really want two of the same design on the layout, especially when there really was one at Merriwa. 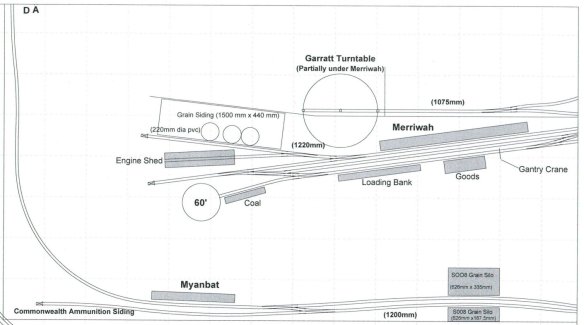 This is a section of the plan but with the focus just on the area I’ve made alterations to.

I’m glad to say that the silos will quite happily fit onto the layout. Keiran makes his silos with PVC pipe and the type needed for a reasonably prototypical 7mm scale version of the silo at Merriwah will have to have an outside diameter of 220mm approximately. The three circles inside the large rectangle are exactly 225mm dia. As you can see if you’ve looked at the plan I posted yesterday, I’ve placed the silo at the back of the yard which is not where the prototype silos where but then I’ve flipped the whole yard anyway so placing the silo in the wrong place is no great sin. The 1.5mX440mm dimension of the rectangle is the size needed for all the drains and other items around the silos plus some space for the driveway up to the wheat truck unloading point which would be between the silos and the backdrop. To be honest I can’t see any real point in modelling this side of the silos because anything there won’t be seen as it will be behind the silos. I’d rather represent just the front face of the silos on the rail side.

Many years ago I modelled one of Kerian’s HO S008 silo kits and the model came out very nicely. If and when he produces the kit I’ll have another bash at the O-scale version but I face the same dilemma with the silo at Myanbat as that at Merriwah: the logical place to site an S008 silo at Myanbat would be on the loop, not the main, and this is on the wall side of the line. If I were to model the whole silo with the truck unloading driveway I’d have to site it on the aisle side of the track. So I’ve drawn in two footprint boxes: one on the aisle side at full size (626mmX335mm) and one on the wall side at half this depth (626mmX167,5mm). Again, if I can avoid modelling the rear side of the silo then I’m all for this. I’m primarily interetsed in the rail served side. In this scale just about all my buildings are built as flats. I can’t see why a grain silo should be any different.