The house plans for our new place are about to go off to be drafted into proper scale plans. I think I must have been feeling the pressure of this significant step in the home building process as I saw my chance to try to squeeze a bit more floor space into the plan in the train room slipping away, but the better half remained rock like in her opposition to making the room any longer, at least until the plans are drawn and the footprint placed on a scale drawing of the land. I went home two weeks ago and looked long and hard at the un-scaled draft of the house plan and then took a look at the layout plan for Musclebrook the layout, which is very much to scale and based on the agreed dimensions of the room, and came to conclusion that I really didn’t like some elements I had been forced to include because of the length of the room. The most prominent of these in my mind was the two long curved points at either end of the Musclebrook yard. I’ve only used a couple of curved points on layouts over the years and these were on HO layouts. My feelings about curved points is coloured by the very poor performance I got out of one on my last HO layout where every second locomotive derailed on the point. When the room was dark a couple of my steam locos would put on a fireworks display of sparks that played merry hell with my DCC system.

I came out fighting, putting up a manly struggle with the better half, saying I simply had to have an extra metre added to the length of the room! I was immediately put back in my box and had confirmed, if this were ever in doubt, that I needed to get with the program :-). The room remains 9m long on the plan that will be drafted over the next few weeks. I went back to my dog kennel where I live during the week to lick my wounds and consider my options. Now while I haven’t yet got my way on the length of the room I did espy on the latest iteration of the home drawn plan that I’d been magically allocated 6.5m of width when I’d only asked for 6.2m. A whole extra 300mm (12″) of space! Never look a gift horse, or a partner who is holding the drafting pencil, in the mouth I always say! So I set to, seeing if this small extra slice of floor space would provide me with any opportunities to remove those two long curved points from the layout plan.

This is the re-drafted version of Musclebrook with the extra 300mm added to the floor plan: 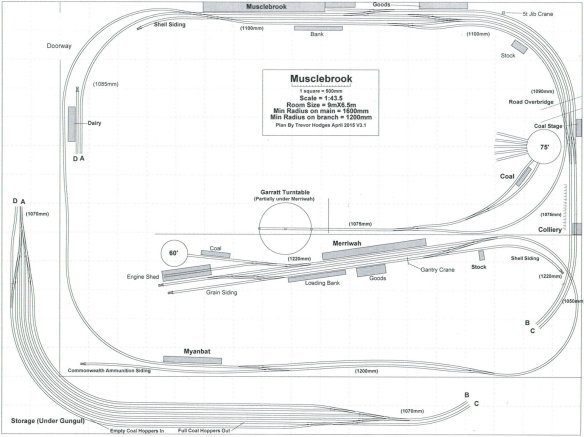 Before I go into the detail of what this plan contains I think it might be worth providing anyone reading this with an easily comprehensible guide to the scale of this plan. If you look at the label “Road Overbridge” on the upper right hand part of the plan, this road is represented by two angled lines. It probaby pays to be aware that these lines are each 750mm long, that’s 2’6″ in old money. I know this because the track drawing software I use allows me to draw lines to exact scale lengths. This length is significant because it is about at the extreme outer limit of what I’d like any benchwork to be in terms of depth. So if you try to imagine the benchwork that will be required to hold up the 75′ turntable , from the right hand wall to the end of one of the tail tracks in the roundhouse, this is going to have to be about 1.5m wide, or 5′. The turntable and roundhouse will sit out on a short peninsula that extends from the main benchwork into the operating space.

Siting the turntable in the position it now occupies,  as opposed to further down the line as in the old plan, creates other issues with the width of the benchwork. For example, the bottom right hand corner starts to get very wide because of the lead tracks to the turntable having to be the radius they are. The distance between the word “Coal” to the lower left of the turntable and the corner where the “Colliery” building sits is getting on for 2m wide.This is far too wide to allow this scene to be housed on one, solid mass of benchwork with continuous scenery. There will have to be an access hole in this corner to allow for maintenance and track cleaning. This will be interesting 🙂 You might ask why I don’t push the lead tracks to the turntbale closer into the corner. The restriction here is that the inner mainline track at this point is already at the sharpest I’ll allow it to go (1.6m radius). These curves are designed to allow fairly large locos to traverse them, 36 and 38 class, and there is no point in keeping the mainline above a minimum radius and then pushing the turntable lead tracks down to a radius where the same locos which were travelling around the main can’t get to the turntable.

So now we have a sense of scale I’ll talk about details. My prime aim in this plan is to remove the two long, curved points from the mainline leading into each end of the scenicked main yard at Musclebrook. I’ve managed this through the use of three sets of double slip points, one adjacent to the 75′ turntable and two at the Merriwah end of the yard. My preference would be to use standard points at these locations, I like double slip points on main lines only slightly more than long curved ones, however they are shorter and more easily built that the curved variety. It needs to be borne in mind that all the points on the “visible”, scenicked portion of the layout have to be hand-built from either code 125 (mainline) or code 100 (branch line) rail. The crossing angle of the curved points on the old version of the plan were 1:21. I have two #6 Fasttracks filing jigs for code 125 and code 100 rail but I don’t own one that would allow me to file a #21 point frog. In fact the biggest one Fasttracks makes is #12. As I pondered how I was going to hand make a point with such a crossing angle I became convinced that I needed to alter the plan. This was the reason for my request for an extra metre to be added to the room. The extra 300mm may not be a perfect solution but it allowed me to squeeze in a point down near the 75′ turntable and this allowed me to remove the long curved point at this end of the yard. Two double slips at the Merriwah end of the yard allow me to achieve the same at the other end.

The effect of installing the double slips at the Merriwah end of the yard is to foreshorten the third yard track to a point where it is little more than a runaround track. However by adding a curving inner stock siding on the Sydney end of the yard I’ve overcome this shortening and also followed the prototype: there was a similar stock loop at the real Muswellbrook. A second prototype feature I’ve decided to try out is to make the lead into the 75′ turntable a switch back as per the prototype. While I would always prefer to follow the prototype this does cause real issues with the depth of the benchwork at this location. I’m going to leave the turntable on the plan at this location for a while and chew it over. I have the floor space to arrange things like they are shown on the plan, I just have real concerns about my ability to crawl under the benchwork and reach a stalled loco at this location when I’m 70! Should I worry about what’s going to be happening in 16 years time? You bet! I plan to be playing trains at 110! 🙂

Adding some extra length to the layout room has not been ruled out entirely, it’s just on hold till we see whether the house will actually fit on the block of land. If I had an extra 1000mm there are all sorts of things I could do with it but the most pressing is to lengthen the straight yard tracks in Musclebrook yard and see if I can’t squeeze in an extra loop. Each standard #6 point is about 500mm long in O-scale so it’s quite feasible I could get two more points inserted each end of the yard to create a fourth loop track. The real Musclebrook had five yard tracks so I’d be getting closer to the real arrangement if this could be achieved.

Another item high on the wish list would be a second petroleum siding. Muswellbrook had four or five of these and I’ve only managed to include one so far. This is partly because of the way I’ve shortened and squeezed in the station building and goods siding. One of the oil sidings was on the other side of the station so there’s no way that’s going to fit. Another of the oil sidings was a few hundred metres down the branch line right behind where the dairy is currently sited. On balance I’d rather keep the dairy to provide for a more mixed traffic pattern. If I could lengthen the line in front of the main goods shed I could probably fit in a point just about where the goods shed is located on this plan and curve a dead-end siding partially into the corner. But like the change in location of the 75′ turntable, I might leave things as is for a while and chew over the implications of this. I bought two of the new 10,000 gal tank car kits from O-Aust while I was in Sydney last weekend attending the Aus7 Forum. If I can cram in a second oil siding into this layout I have a feeling that it will appear with Ampol signs to match the decals that came with these new kits 🙂

One final change on the cards might be that Myanbat acquires some basic lineside industries including a grain silo. One long neglected source of traffic on my O-scale layouts has been grain so adding a grain silo to the loop at Myanbat wouldn’t be too hard to justify, along with a stock race and possibly a short loading bank. This layout is going to be operated with the locos and rolling stock earning their living. Having a couple of grain loading points on the branch will help broaden the mix of traffic. There aren’t too many other locations in the state of NSW where stock, coal, grain and dairy can all be credibly modelled in reasonably close proximity. I would like to make the most of the possibilities: and it might give me the motivation to get the four unbuilt Waratah RU hopper kits out of the cupboard to build them. These can now be acquired from ModelOKits.

2 thoughts on “Tinkering With The Plan”