It’s been quite a big week for Morpeth. The operating session went off pretty much without a hitch and I think everyone enjoyed themselves. I’d put in so much time getting the track in QW yard laid and wired up that I really didn’t have time to prepare other elements that I was pretty sure would give first time, guest operators trouble. And let’s face it, as this was the first ops session, everyone was a first time operator.

Peter and George concentrating on getting their trains through Raworth and into the storage sidings.

I did do some filming but I need a new video camera and the latest version of Adobe Premiere Elements is giving me trouble so that may have to wait. For the time being still photos will have to suffice. We really only ran three trains (one of those being a CPH railmotor) so it wasn’t exactly what you’d call operationally intensive, but the yards on the layout are new to all of us and really quite limited in capacity, so there was some degree of waiting around while someone else’s train cleared the section. The layout was designed as a shunting puzzle really so in this sense it was supposed to be lots of pushing wagons about and I have plans to make some adjustments to the track plan to accommodate this even more. 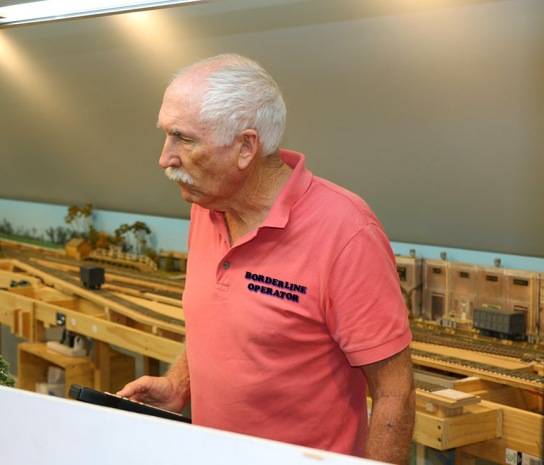 Phil really had the hardest job by being given the the down pick up goods. Between barely tested track and couplers which really needed to be changed and serviced it’s a minor miracle he managed to make it out and back in one piece.

We seemed to have settled on the name “The Borderline Operators” as our small group’s title so I’ve given the look a test by doing some Photoshop magic to Phil’s shirt in the above photo.

I’ve spent the days since Wednesday working on all my wagons which have an older style coupler that continued to throw up issues. I’ve manged to fit the newer style couplers from Protocraft to about half the wagons that needed to be converted and I also put a fair bit of time into the extended version of the same brand of coupler (I added the extension myself) that was fitted to the 48 class loco Phil had been using to as it wasn’t sitting or swinging properly. The signal I wrote about in the previous post had to be removed as it was causing clearance issues on the main and loop. I have plans in train to sort these out. 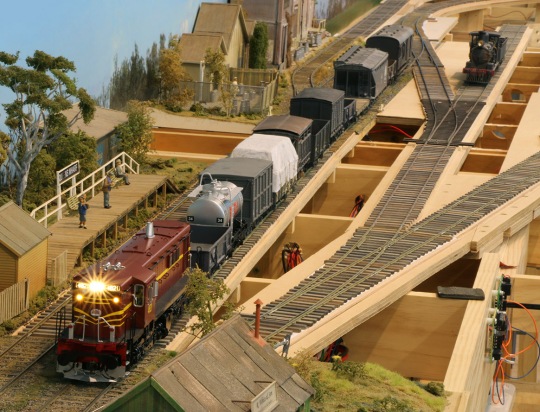 This photo shows the culmination of about 6 months work. It shows a train in the loop at Queens Wharf with every wagon fitted with Protocraft couplers and with the maximum length train allowed by the length of the loop with loco and brake van attached. It may not be a particularly long train but it’s the ruling loop on the entire line, being the shortest, so it will have to do! 🙂

I’ve been making trips out and back to the train room as I’ve gone about fitting the couplers to the wagons that needed it and this afternoon gave the 48 and some wagons a test run. I ran the train into the loop at QW and picked up a wagon Phil had placed in front of the dairy, hooked up to the front of the train and ran the whole train around the layout a couple of times.

Excuse my French but it was absolute f&^king magic! 🙂

8 thoughts on “The Borderline Operators”