Today I can finally announce the end of the Morpeth to QW curve “saga”. The new curved, hand made turnout is installed and working properly, the curve of main line track leading to either side of this turnout is laid and working beautifully, both turnouts (a Peco turnout and the hand made curved one adjacent to it) have reliable, Tortoise switch machines installed under them and both are now hooked up to a brand new Switch8 MkII (the MkII is important because MkI versions won’t work with Button Boards) and an associated NCE Button Board so they can both be switched using toggle switches mounted on a small control panel as well as being operated “remotely” via the hand held throttles. Oh, and the control panel has LED indicator lights to tell the operator which way the turnout is switched. This is no small matter as I’d decided long ago that all control panels, including small “sub” boards like the one I hooked up today, would have route indication as a standard feature. It’s very easy to not bother and say “if operators want to find out what way the turnout is switched they can just look” but I know from experience that while this is always an option it pays to have layers of visual indication. 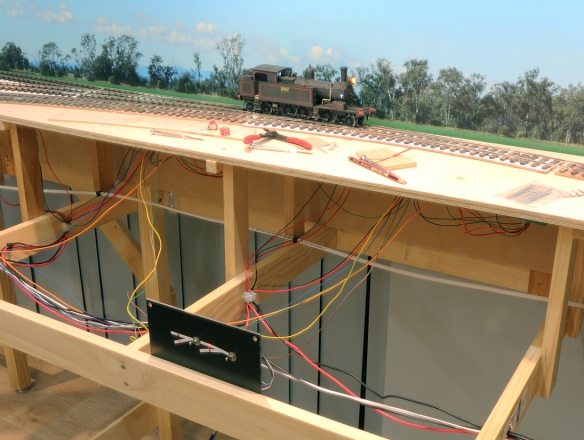 This may not look like much but this is the result of pretty much 3 weeks work on the layout, and it replicates what was already there! 🙂 However this time it all works perfectly, you can throw the turnouts from anywhere in the room via a throttle and know they’ve actually changed route and they’re hooked up to that little black control panel (with LED route indication). It’s temporarily attached to the benchwork waiting for the installation of the fascia. I’ll tidy up and secure all those loose wires with cable ties when I know that I’ve actually finished the wiring.

At the time of my last post on the blog I was doing a fairly good impersonation of a friend of mine (one with a full beard who many reading this will recognize) by grinding my teeth in frustration at the track machinations I was putting myself through. I won’t go back over that disaster but I will mention that I relaid the small section of one of the curves (after I wrote that last post) and it was wrong, again. So this time I pulled it all up, set out the curve as carefully as I could, relaid it with a beautiful transition curve that I knew was absolutely perfect (not only was I sure because of the way I’d made it but I could see how sinuous and smooth it was) and ran 2002 through it. And she derailed!!!!!!! Not in exactly the same spot as before, this time she came to grief about 20cm further along. So had I just transferred a tight spot a bit further down the line? Well yes I had but this tight spot was far broader in radius than I the radius I knew 2002 could get around. So what was up? I ran her back up the line and she derailed on a mainline curve of even broader radius!?!?!?! What the #%&^%*& was going on?

Now if you go back a couple of years on this blog you’ll be aware that 2002 is a scratch built loco I built in 2015. I’ve also mentioned any number of times that both the layouts I’d had up to this point had no curves. Now combine these two things: a scratch built loco which was built to round no particular curve radii (I didn’t have a curve of track to test her on while she was being built) and a brand new layout that with branch new curves. What does this spell? So this layout is the first time 2002 has been run much at all and certainly the curves on the layout are the first she’s traversed. So why wouldn’t I expect she’d need some “teething” trials. After-all, I added pickups to her trailing bogie a few weeks ago because she was hesitating on some of my turnouts. I ran her back and forth through the offending area and looked closely at what was happening. It didn’t take me long to realize that the same trailing bogie was the culprit.

The solution to 2002’s tracking problems was in the width of the slot in this bogie. It wasn’t long enough to allow the bogie to swing sufficiently from side to side on curves. So on a tighter curve the pony truck would lead in, the first driven axle would try to follow but was restricted from doing so by the trailing bogie not allowing the front of the loco to swing sufficiently to follow the curve, thus making the leading driving wheel derail. A couple of minutes filing to make the slot a little longer solved the problem.

Now don’t get me wrong: the track and that curved Peco turnout needed to be replaced and while I was at it both transition points between the pre-existing layouts and the new section on the main line also needed to be made smooth and secure, plus the shoddy and slap dashed wiring (I’d used plain speaker wire for the bus wires, not colour coded black and red paired wires like I had on the rest of the layout) needed cleaning up and while I was at it how about swapping out the Peco switch motors for Tortoises? And I could really do with a small control panel in that area too couldn’t I? And then I found 2002 had a little hidden derailing bomb lurking in her nether regions. It never ends! Well it does, today!

In addition to all my travails with the electrical, track and DCC systems on the layout, I also had a small glitch in the hand laid turnout that was sitting there waiting for a solution. One of the switch rails (the one nearest the backdrop) was sitting high at the heel end of the point. It was nice and hard up against the stock rail when thrown over but it was a good 2mm higher than the stock rail on the narrow, pointy end and it took me a while to work out what was wrong. I’d lifted it, bent and filed it but it was still sitting up and there was no way my fussy cattle wagon (the one that had started all the trouble on this part of the layout) was ever going to happily go through the turnout with a wonky switch rail. I was thinking about the problem when it occurred to me that the rest of the length of rail was sitting down nice and snug, it was just the last 30mm that seemed to be sitting up, as if it was pivoting on a high point… as if one of the sleepers was thicker than the others around it! Eureka! I pulled the switch rail out again, cut a small trough in the offending sleeper and the problem was solved.

Sometimes the solutions to problems are sitting there staring you in the face but when they’re swimming through a veritable sea of troubles I think we might all be forgiven or not coming up with the light bulb moment straight away. 2002 ran at speed back and forth from Morpeth to Queens Wharf with no derailments today. The simple pleasures are often the best 🙂

1 thought on “All The Time In The World”