Since posting the videos of making a point a few weeks ago I haven’t made any posts: not because no progress has been made on the layout but because I’ve been doing boring stuff like getting the storage sidings laid and wired up.

Anyone who’s built a layout will find this familiar. This is the forest of hanging wire from about 70% of the storage sidings. Boring but necessary work and I’m glad to say the wiring in this part of the layout is basically complete.

I’ve spent the past few days laying the track in the storage sidings, preparing to install a control panel and wiring up the track, point motors and QSnap stationary decoders that I’m using on this part of the layout. I’m waiting for a delivery of push buttons from China before completing the wiring of the control panel. I could have purchased these from an outlet like Jaycar but they’re a 10th the price via an online outlet so I’ve decided to wait.

Up till now I’ve been using the DCC functionality of the stationary decoders I’m installing to switch the points but I thought it was time to make a move installing control panels in some areas of the layout. As the NCE QSnaps come with the capacity to install buttons without any extra components I’ve decided to make and install a control panel at the throat of the storage sidings. I’m just waiting for a slow boat from China to allow me to complete it 🙂

I’ve been puzzling and thinking about what to do about the pier and ship model over the past couple of months. As they wouldn’t fit into the layout design there has been precious little progress on either model over the past few months as I’ve had more exciting projects to work on. After discussing this situation with Phil over a coffee last week I decided to bite the bullet and modify the pier module to allow it to fit into the layout.This was going to be fun! 😦

I started by chopping about 270mm off the end of the pier.

The next step was to lop about 300mm off the end of the module. A skilled surgeon skillfully using  precision surgical tools is a joy to watch. Anyone who knows a skilled surgeon with skilled hands who might be willing to come and help out when I have to do these jobs is welcome to pass on my contact details 🙂 Today Phil and I just hacked away at it till the required bit was removed.

I did some planning and thinking about how to remove the required amount of length from the pier module and asked Phil to come over and apply first aid if I fainted. We lopped off two sections of pier (and the associated legs) and then sliced through the wood and aluminium of the module itself. Not exactly pretty but it went well and there is now space at the end of the module to allow someone to get to the other side. Prior to this there was room for the module but no way to get past it unless you could limbo. 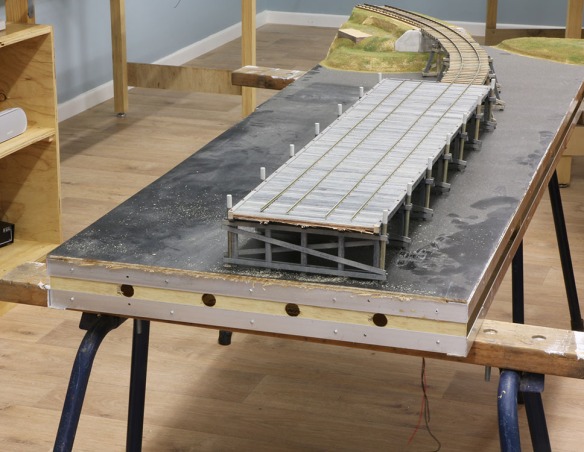 This photo shows the new shortened pier in all its hacked about glory.

I have yet to re-clad the sides of the module with its MDF skin but I did have time to make the benchwork so the pier could be butted up to Morpeth. 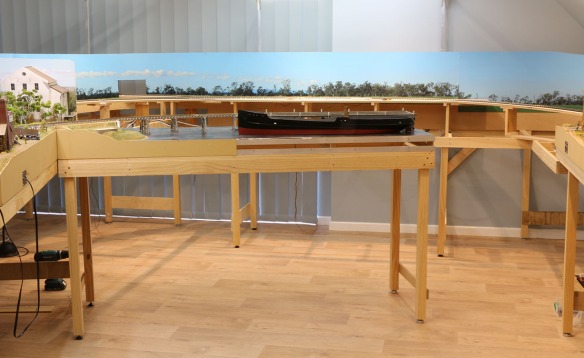 I couldn’t resist bringing the ship model out and plonking in place for a photo. As can be seen on the right hand end, there is now room for the passage of an operator or layout visitor to the other side of the pier. Without this modification the pier module would have languished in storage in my trailer.

Operationally there has been nothing added or lost from this lopping exercise but it has completely changed the character of this part of the layout. Morpeth (the portable layout) exists to allow the inclusion of a pier and a ship model. Even though it has morphed into a semi-permanent home layout the lack of the pier because it wouldn’t fit has never sat well with me. I don’t know why, but it had never occurred to me to lop 12″ off the end of it to allow it to fit. Maybe the idea of taking to a mostly completed model with a hacksaw and a cross cut saw isn’t normally part of the agenda 🙂

1 thought on “Liability To Centerpiece”