I’ve had my father-in-law staying with me over the past few days. He’s an ex-locomotive fireman, driver and train inspector who worked on the NSWR for over 40 years in the Riverina region. He’s a lovely bloke, very Australian, in the best sense of the word, with a great love of bush poetry from the likes of Lawson and Patterson and he really loves a yarn. Getting him talking is easy, it’s stopping him that’s the real problem 🙂 However, in spite of this I managed to get some work done on the layout this weekend and it was time to cut some wood and get Queens Wharf up off the floor. I’d been thinking and cogitating over this step for a number of weeks because I knew I wasn’t going to like the height of the layout after I’d decided on the compromise between the height of track above the floor, the height of the backdrops and the distance I was prepared to allow the layout to sit out from the walls. If I’d been building these sections of layout from scratch I probably could’ve managed the issue a little differently, shifting the taller structures to the front and possibly lowering the backdrops and trees a little. However, in the end this was only going to give me a few more inches of height. The room I’m building this layout in has sloping ceilings and there isn’t much I can do about this: raise the layout to the height I’d prefer and I’d have to use curves that would have been at home on a HO layout, lower the layout to the point where I can get decently broad curves and I wouldn’t need to build benchwork because the layout would need to be on the floor. Still I’m in this hobby to make decisions and present myself with a series of problems to solve. It would be boring if this stuff was easy. Well that’s what I keep telling myself 🙂

Even without something to gauge the height of the benchwork against, you can tell this is less than an ideal height. Rail height is approximately 1m from the floor, about 300mm (12″) lower than I’d prefer.

I had the layout sections of Queens Wharf already in the room, I’d purchased the wood I was planning to construct the benchwork from a few weeks ago and I had a design nutted out for the benchwork units because I’d developed it a couple of years when I used something very similar in my previous home layout. On that occasion I’d started to set both Queens Wharf and Morpeth up as a permanent layout but had to abandon the scheme when my career took an unexpected turn and I sold the house the layout was being built in.

While I’m a real fan of Linn Wescott and his L girder benchwork, I must admit to only having the space required for its use on one occasion; in this application and in all the other layouts I’ve ever built I’ve never had the room to justify its use. I use his idea of the L-girder but these have been turned over and used as rails on which my pre-existing modular layouts will sit. I found it interesting to be reading some of Pelle Soeborg’s thinking behind his most recent modular layout today in MR and finding that I’d come to many of the same conclusions he has about wanting to be able to pull the layout apart at some point down the track with minimal damage. I may not be the one pulling the layout apart but I do want to allow for this if it ever needs to happen. I’m going to preserve the breaks in the backdrops and track where possible to allow the sections of layout to be unbolted and removed from the room in blocks.

After doing some calculations and checking heights I commenced cutting the 2x2s for the leg units. These all have adjustable feet on them to allow for an uneven floor and the floor is uneven, I’ve already checked. The leg units are recycled from the previous aborted attempt to set these two small layouts up as a home layout so the really hard jobs had mostly been done. I already had the leg units made and the adjustable feet installed, all I had to do was disassemble them, cut the 2x2s to the shorter length this room required and reassemble them. I then made up four 2.4m long L girders and screwed these into the tops of the leg units. The last step was to cut some diagonal braces to provide a bit of support to the legs and then haul the resulting units upstairs. Ever since I decided I was going to set Queens Wharf up as a home layout I’ve always planned to extend the passing loop at this location to allow for the passing of reasonably long trains. After consulting my plan I’ve decided that I can extend the loop by 1.2m (4′) essentially doubling its length and making it far more practical. 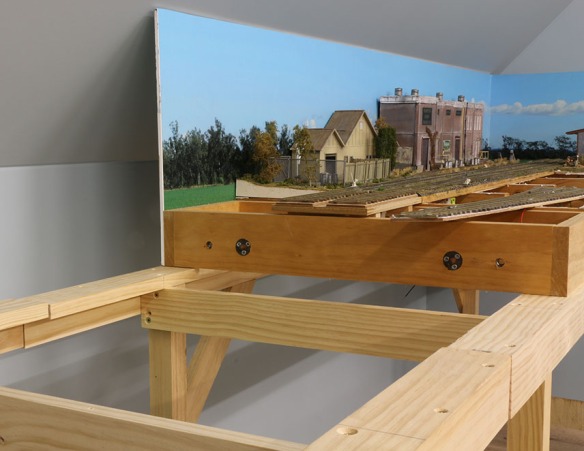 This photo clearly illustrates my dilemma with the height of the backdrop and the sloping ceiling: lower the backdrop and I start cutting into the scene, raise the benchwork and I lose the ability to have what I feel are reasonably broad curve radii because this pushes the layout further out from the wall.

Now that the benchwork for QW is built I’m going to spend a few weeks sitting and looking at it for a time to see whether I can live with it or whether it prompts a re-think of the plan. 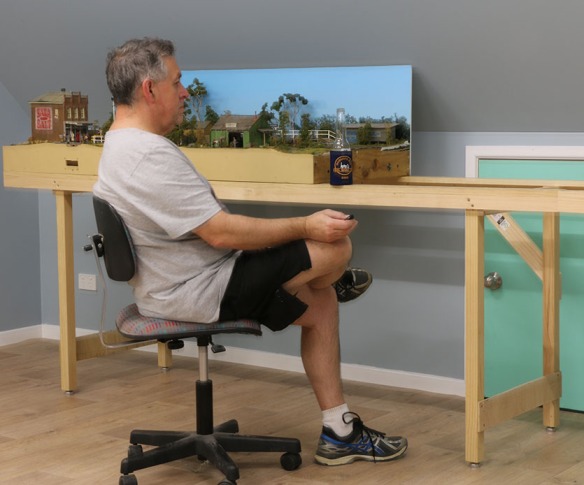 I think this photo illustrates the problem with the layout height. I’m used to a layout that sits about the height of my armpit and to get a similar view at this height you really need to be sitting down. As I grow older it’s quite possible that sitting down while I shunt the layout may become a necessity rather than a luxury. Luckily my bald patch isn’t too apparent in this shot 🙂

My house guest told me quite a number of stories of his time on the railways and most are pretty funny. One involved a driver by the name of Speedy and his mate who were working the goods yard at a station near Hay in southern NSW. Evidently the usual station master was on leave for a number of weeks and his replacement had a very attractive, young wife by the name of Darlene. Most NSW stations provided accommodation for the Station Master adjacent to the station yard so these houses and their surrounding yards could be seen from the line. On this particular day Speedy and the fireman were propelling a string of wagons into the goods shed which was a “through” design with doors on either end. The doors on the far end were shut and the shunter was down that end of the line using hand signals to direct the crew. Evidently Darlene was out in the yard of the Station Master’s residence hanging out the washing and she was dressed in a pair of quite revealing shorts. Speedy was watching her from his side of the cab as she bent to pick up items of clothing and he called the fireman over with a “take a look at this”. The train was still moving as both of them stood glued to the scene with the shunter on the ground near the end of the train wildly waving his arms about and shouting for them to stop the train. Of course the inevitable happened and the wagon at the rear of the train hit the rear goods shed door, smashing through it and propelling several wagons through the other side.

Both men were hauled up before the local train inspector and questioned about what had happened. Speedy told him, “I couldn’t see the shunter, he was on the other side of the wagons.”

So the inspector turned to the fireman and asked him why he hadn’t seen the shunter’s signals. He replied, “I had a cinder in me eye.”

“Why couldn’t you see him with your other eye?” was the next question.

“Let me poke you in the eye and we’ll see how well you see out of the other one,” the fireman replied.

They both got away with it…

5 thoughts on “Off The Floor”