Over the past two or three weeks I’ve been making steady progress on the Stoney Creek Designs foundry kit that I wrote about here in my last post. 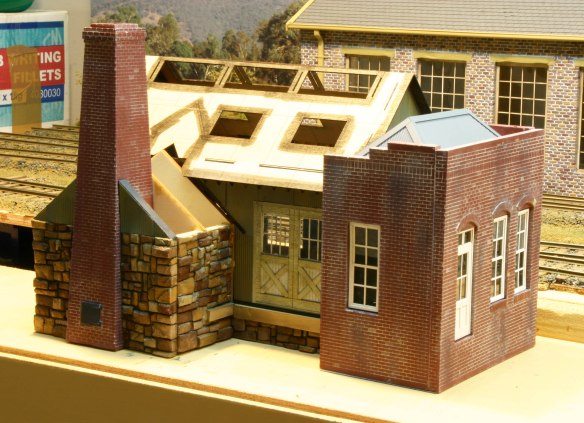 This photo shows the progress I’ve made on the foundry building that I’ve been working on. It’s a nice little building kit and has been a real pleasure to assemble although I’ve found it a fairly expensive exercise.

Being of US origin the kit is of course nominally 1:48 rather than the 1:43.5 scale proportion I work to but I don’t mind that the building is a slightly smaller proportion in this context. I have a tendency to deliberately place objects at the front of my layouts to mask unrestricted views of the track and having a building of slightly smaller volume allows for this effect without the building overwhelming the scene. This building has a wonderfully interesting set of roof lines mixed in with industrial smoke stack and I like the way these hard geometric lines will break-up and disturb the natural undulations of the river banks and tree canopy that sit adjacent to this scene. I have replaced the original tar paper roof of the brick office part of the building with a small peaked corrogated pitched roof but aside from that the building is pretty much straight out of the box. There was a tall industrial chimney on the banks of the Hunter River that Morpeth sits on not too far from this spot and as I doubt I’ll be able to reproduce that particular very tall chimney, the smaller one included with this building had a lot of drawing power for me. It gives this part of the layout a nice industrial flavour without chimney having to be an item I need to remove from the scene for storage which is what I would have to do if I tried to model the tall chimney from the mill. The mill is the next building on the to do list for this part of the layout.

I’ve followed the instructions for this kit quite closely in both the construction sequence and the colouring of the components. Like any kit the parts to this do need to be assembled but I’ve found that this isn’t the main task in the construction of this building. What has taken the most time has been preparing and colouring the parts. The instructions specified a range of colouring media that I had not tried before and because one of the reasons I had for building this kit was to learn some new modelling techniques I spent a good deal of time tracking down the colouring media specified in the kit’s instructions. Two types of colouring media that were new to me were Pan Pastels and Vallejo Air air brush paint and I spent a lot of time and money searching and buying both online and at my favourite hobby shop.

Vallejo paint should be available at any well stocked hobby shop and I picked up the colours I wanted from Hobbyrama in Brisbane, which has a fantastic range of paints. What I like about the Air range of this brand is that you can place the paint straight in the air brush cup and use it without thinning. Coverage is good and I like that it has a nozzle incorporated into the bottle thus making it easy to dispense. I’d read about Pan Pastels in the past but I had hesitated to buy any because wherever I looked they always seemed to be extremely expensive. I wanted about 8 or 9 colours and I simply couldn’t seem to get the colours I wanted at a reasonable price. You can get kits that bring the price down quite a bit but these always contain colours I knew I wouldn’t need and some outlets were selling the individual colours for as much as $34 per small pan of colour! I kept searching this time and the best outlet in terms of range and price I found was an art supply shop (combined with a newsagent) in Adamstown, Newcastle, NSW. You can find the link in the list on the side of the main page of my blog if you’re interested. The pastels are a very interesting product and deserve to gain a good following in the model railway community for the weathering of buildings and rolling stock if the prices are brought down to a reasonable level. I bought a few of the individual colours at $11.60 per pan and the kit set I bought was for rust and dust so most of the colours will come in useful. These pastels are extremely flexible and easy to apply and control is much better than I’ve had with products like Carr’s and Bragdon weathering powders. They can be applied and then rubbed off with a standard pencil eraser to get different effects and the range of colours is excellent. But the price! Ouch! The mortar lines in the building above were done with a colour from the Pan Pastels range.

Generally speaking this has been an enjoyable but quite expensive exercise so far. I bought quite a few products that I haven’t actually used and I purchased some items online and paid quite a bit for postage because that’s the only way I could get my hands on them. When added to the not inconsiderable cost of the kit it would have been a lot more cost-effective to build something from styrene from scratch, but I probably wouldn’t have learnt so many new techniques or had half as much fun.

So it’s a balance…