This is a tale of how I managed to destroy two ESU L series V4 Loksound DCC decoders with 24 hours of each other. It’s not a rant against ESU because up to this point I’ve never had a problem with the decoders from this company that I’ve installed and I find them by far the best decoders in terms of sound output and quality as long as they’re paired with good hi bass speakers of the correct ohm-age. However at $AU260 a pop they’re far too expensive to stand by and watch smoke come out of them and not pass on my experience to others. So this is a post for my newest BF Rob Anderone on Facebook who asked me to share what happened. 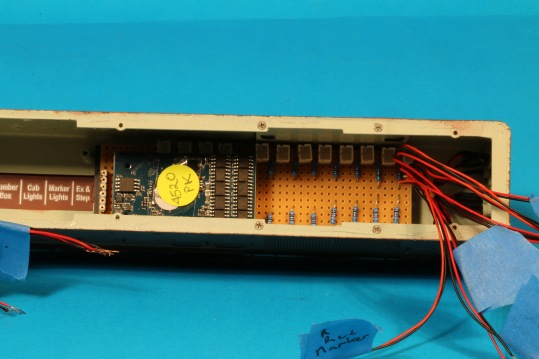 I’ve included this photo to illustrate what I’ll be talking about in this post. I was testing this home made distribution circuit board prior to installing them (I was working on two separate locos of the same class when the decoders failed on me) permanently inside the locomotives’ shells. The white sockets you can see running down each side of the board receive the wires from the LEDs front and rear and it was these connections I was testing when I fried the first decoder.

I’d been working to install two L series deciders in the body shells of two 1:43.5 scale Auscision 45s which are large Goodwin/Alco hood diesels built for the NSWR. One of these locomotives was mine and the other belonged to a friend. I built a vero board circuit based on the 7th Heaven article written by John Parker and everything was made and ready to install when I made the decision to test all the light/sound/decoder connections on the boards prior to installing them. I had a second circuit board supplied by John that he’d built for testing purposes to try out a different variety of sockets and plugs. These circuits get a little tricky to get at once they’re installed and the wires from about 16 LEDs are running to them.

You have to picture in your mind my rather Heath Robinson “testing” station with loco chassis sitting on about 1.5 meters of test track: connections for an NCE Power cab at one end of the track, Lokprogrammer at the other end and a loco chassis sitting in between on the track. I have two LEDs wired to the correct plugs to mate with the sockets you can see in the photo and I’m working my way down the board (which is plugged into the chassis motor/track connections) testing each set of connections so I know that when I install the circuits into the loco they will actually work. All the LEDs in the loco shells have been pre tested and I know all the wires are going where they’re supposed to. In fact I’d replaced a few of the factory installed LEDs because they weren’t working when I tested them.

The procedure I was using to test the LED connections to the decoder was to start by having both the Lokprogrammer and the Powercab unplugged from the test track. I plug the LEDs into two of the sockets (let’s say they happen to be for the short hood’s headlights). Once these are plugged in I power up the Powercab and press the horn to ensure I have a connection and then test the appropriate function button. In this case it would be the headlight and I’d need to make sure the direction is set for forward and if everything is working the LEDs should light up.

Now we get to the problem. At some point I got sloppy and forgot to unplug the Powercab before moving the test LEDs to the next set of sockets. I attempted to plug the LEDs into the next available sockets on the board with the loco powered up and watched as a component on the decoder glow red after which a tiny whisp of smoke emerged from this same component. I’m told this was the capacitor. After this I could get no sound to come out of the loco. I had a spare L series decoder in a drawer so I got this out and determined to soldier on after wiping away the tears over my dead decoder!

Testing continued on both boards and I found both were working perfectly and so installed one of them in my friend’s loco and got it running with sound and lights. Next day I placed this loco on the test track with the body shell sitting on the chassis and while I had lights and movement I couldn’t get it to make any sound. It had been working perfectly the day before and I hadn’t been testing LEDs by that stage. I hooked up the Lokprogrammer and uploaded the sound files and the CV files and while the loco moved and lit up it would not produce a sound. I swapped in my third and final decoder (which was still plugged into the circuit board of the 2nd locomotive locomotive) and it worked perfectly: light, sound and movement.

I sent both dud decoders to my friend and DCC guru John  Parker to look at and he tells me both are suffering from a fried/blown capacitor. The first one I know what happened to because I witnessed it happen in graphic detail. Why the second decoder should have suffered the same fate I have no idea, however unlike the first it shows no outward signs of burn marks where the component glowed and smoked so whatever happened to it was a bit less spectacular.

So my friend has a working locomotive and I have a pile of parts and no decoders.

Leave a Reply to John R B Parker Cancel reply