This morning I finally managed to get the first of the two new control panels installed and operating. The first was for the yard at Queens Wharf and I did this in conjunction with installing the mini control panel at the super phosphate siding which is outside the yard at QW but still within the control of the QW box.

As I began work on the control panels for both QW and the storage roads I decided that the mini panels for a couple of sidings along the line needed to be installed at the same time. This “mini” panel controls a single turnout just up the line from QW yard. It will allow this siding to become a part of the operating scenario when I have the next operating session in early January.

In spite of putting in a lot of work on the layout and it’s new panels and electrics over the past couple of months I failed to make the deadline for the Borderline Operators gathering in early December. No trains were running and I was the subject of ridicule and finger pointing although that soon stopped when they started stuffing food in their mouths at lunch 🙂 However my friend Phil managed the same feat when the our group met at his place in November so I’m in good company. He was so embarrassed he took off for NZ for weeks in order to avoid small children pointing at him in the street 🙂

There were actually two reasons no trains were running on Morpeth and the fact that I’d essentially pulled the wiring apart on half the layout only partly explained this. For some reason I’m yet to explain one of my power packs decided to turn up its toes and as such when I flicked the switch to start things up Thunderbirds were definitely not GO! I managed to track down this problem and have replaced the offending power pack with a stand in but I’m actually going to see if I can get the dead one repaired as it cost a fair bit and has hardly done a lot of work over the years, spending 90% of its life in storage.

The other main reason for my failure to have trains running in time for the Borderline Operators arrival was that I turned a quick install into a major renovation of the layout by deciding to install new fascia right along the front of QW and down to the doorway at the top of the stairs. About 10 meters of fascia in all. I did this blithely and in the knowledge that things always take far longer than you anticipate. As I began work on the job I realized that I really didn’t want to have to come back and re do this work again later and that meant that, as everything I was going to be doing was to be attached to the outside of the fascia, I had to install some fascia first. It was this which took all the time. 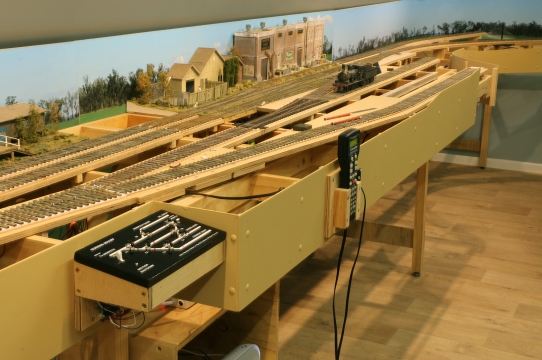 This shot shows the new QW panel in place and a view along the aisle down to where it bends around the end of Morpeth heading for the super phosphate siding and the door. I think this demonstrates clearly what I’m talking about in needing to install the fascia first, before the various control panels and other items along the front of the layout can be installed.

I worked on both installing the fascia and making and preparing the control panels in tandem and I’m generally happy with the way the panels have come up. Actually wiring the QW panel into the layout was quite a quick job really as I’d done so much wiring of the panel and under the layout prior to actually hooking it up.

In the end I managed to get all the features I wanted into this panel. I recycled the housing from the old storage road panel for this one and I would have given myself and easier road if I’d simply built something new with a little bit more space but it all worked out in the end. The turnout motors are thrown by push buttons and the route is indicated by LEDs. All the main features are clearly labelled with decals and I also managed to squeeze in the QW power shield switch.

The electrical upgrade of this part of the layout is now complete. All I have left to do before Jan 8 is hook up the storage road panel. This one includes an NCE Mini Panel and this needs to be programmed so I have my fingers crossed that this isn’t beyond me.

Modelling Topics On My Blog

Retailers Who Specialise in O-scale