I really dislike starting a blog post with “it’s been a while since I last posted” because it’s self evident if you haven’t posted for a while that it’s been a while! But it has been a while and as usual with me it’s because I haven’t really been doing much modelling or layout work worth writing about. I’ve been caught up doing a couple of significant woodwork projects but I finally finished the most important of these today and I was able to swing my attention round to addressing the need for a control panel on the storage roads of Morpeth. I snapped a couple of photos of the control panel today as I applied contrasting coats of paint and thought I might quickly go through how I make my panels. 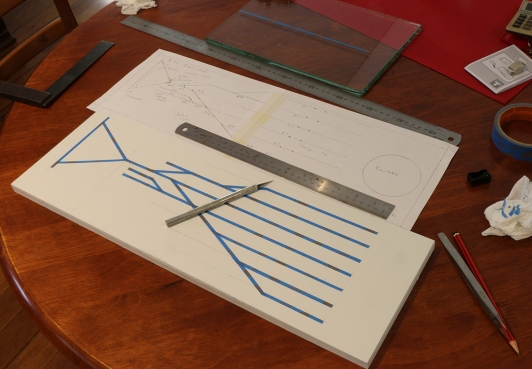 There’s probably some very high tech way of doing the artwork for control panels, I know there is, I’ve seen YouTube vids of such techniques, but the method I use is cheap, simple and effective. I’ve also been making control panels for over 30 years sing this method so as it works for me I can’t see a reason to change the process. It also uses my preexisting skill set so I don’t have to spend 2 months learning a new computer program to produce them. I start with a piece of 3mm MDF, glue a 12mmx12mm pine frame to the read side of this and then the upper side is sprayed over with a white coat of paint from a pressure pack can.

I spent a couple of hours yesterday drawing out a plan for the new panel on two pieces of trying paper which was a good thing because I decided after looking at it that I didn’t like the way the triangle was crowded on the left hand side. So I stretched the plan out, giving this side more room. One of the problems with the first version of this panel (which I wrote about a couple of years ago) was a similar problem to the crowding on hr plan I drew yesterday. And just as a reminder, the reason this is V2 is that I decided to change out all my solenoid switch machines for Tortoises after my last operating session. As I was changing the way I would be throwing the turnouts I had to alter the panel anyway and I took the opportunity to the address the problems with the first version. This one includes the mainline triangle which will have route indication included and it also includes the two new storage roads I’ve installed since I made the last panel. I’m also going to throw the yard ladder using a mini panel and one button routing so this panel is not only longer (at 520mm), it will also be quite a bit simpler to wire up. He says with his finger firmly crossed 🙂

After drawing up my full sized paper plan and making any adjustments I felt were needed I then cut lengths of blue masking tape into 4mm wide strips and cut these on a 12mm thick pane of glass I keep for this and other jobs. I laid these along some pencil lines I’d drawn on the white surface of the control panel and trimmed these with a scalpel that had a new blade in it. I then took the panel back out to the shed and gave it a couple of coast satin black paint.

After the paint dried I brought the now black panel inside and peeled off the masking tape. Simple, effective and handsome (a bit like me) 🙂 The reason the panel is on the dining table rather than the workbench is because it is a bit long to work on at my modelling table easily.

The next step will be to mark and drill some holes for LEDs and push buttons and then I’ll print and apply some white decals using my Alps printer. Then I have to wire it up. As the next operating session is scheduled for the 4th of Dec I have just under two weeks. Easy Peasy!