There’s been lots happening on the Morpeth Line recently and I’m on first name terms with the postie. I have a feeling he thinks I’m importing drugs in all the packages I’ve been receiving recently 🙂 Work has proceeded on the NG road bed and I decided to start by laying sleepers round the only bend in the line. 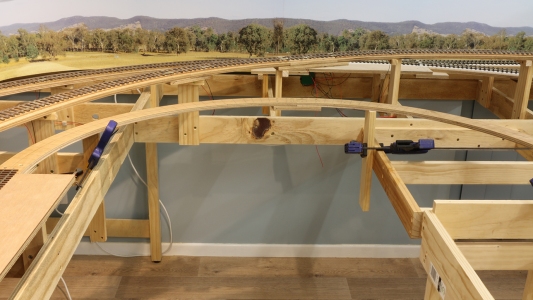 There’s only one curve on the branch line from Raworth to Barren Jack so I thought I’d start by laying track on this first. This photo shows the sub roadbed of 12mm ply temporarily propped in place. There’s been a little more progress since this shot was taken but things have moved from the layout room to my work room where I’ve been making a start on making the track for the NG line.

I made the decision a while ago to lay hand made turnouts and track on the main layout part of the BJ line and to use flex track and ME points on the modules that form the peninsula. There is a logical reason for this mixing of track work, which I’ll go into in a later post, however I also decided that as I’m extremely comfortable with the method I use to make and lay hand made track and turnouts on the SG line that I could see no reason to do something radically different on the NG. I make a sub-road with 12mm ply, cut up pieces of thinner ply (4mm and 5mm) to lay the sleepers (ties) on and pin the rail to these. I then use small wood screws to fix the sections of track into position, including the turnouts. 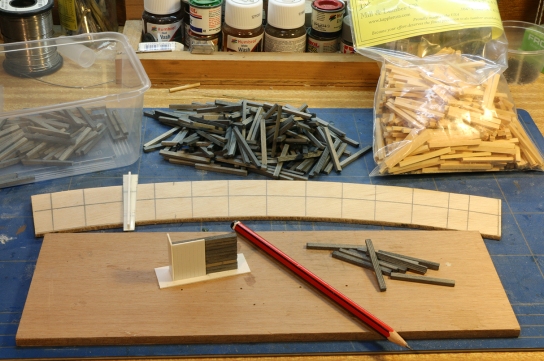 I’m using Kappler Sugar Pine sleepers on the NG line which is fine by me as I use the same brand on my SG track. The NG sleepers are a little thinner than the SG item (and of course shorter and shallower) but I’ve simply adjusted things to fit my method of track laying. I scribe the top of the sleepers with the edge of a razor saw to exaggerate the grain, pre-stain them in a bath of rubbing alcohol and black wood stain, draw a centre line on one side of every sleeper using the little styrene jig you can see in the photo (I stack them up 10 at a time and draw a line along them all at once) and then glue them to the 4mm track base I’ve already cut to shape and drawn a centre line on using PVA. The centre line on the sleepers is simply lined up with the centre line on the track base. I did try using a wedge shaped styrene spacer jig this time but I found it wasn’t working the way I hoped so I just did the gluing of the sleepers by eye and a plain strip of 9mm wide styrene.

Once all the prep work is done it’s simply a matter of setting to and laying sleepers till I reach the end of the section of track. Very high tech 🙂

Before laying the rail I wanted to acquire some spring loaded roller gauges of the same type I use on my SG track laying. While I didn’t look all that hard I couldn’t find anything of the same type in 16.5mm gauge so I decided to make my own. I drew up a plan (on paper, how low tech) in my spiral bound plan book and set to this morning making the first part for the four gauges I intend to make. Before I go any further I need to remind anyone who has been reading this blog for a while that while I have two lathes and a mill and myriad other tools you could fit what I know about metal shaping on the head of a pin so I’d like to acknowledge a couple of Youtube denizens who have been of great assistance:

Blondihacks at https://www.youtube.com/channel/UC7Jf7t6BL4e74O53dL6arSw has a great series of beginners metal turning videos. Ok I should be up front and say she’s a WOMAN but don’t let the old stereotypes prevent you from visiting her site. She does a far better job of explaining what needs to happen on a lathe to this thick male than most of the blokes I’ve watched and she really knows what she’s about. By the sound of her accent she’s a Canadian but I’ll even overlook that… for the moment 🙂

Mr Crispin at https://www.youtube.com/user/MrCrispin96 OMG this guy is so bloody English! Watch a few of his videos and you’ll see what I mean. He’s been a bit quiet recently as he sets up his workshop but he posted a new video today and it’s about a Myford lathe. He is another great one for good, clear explanation and he’s well worth a look.

This Old Tony at https://www.youtube.com/user/featony This channel is a bit more high end but he’s worth watching just for the laughs. Give him a try, you will laugh! 🙂 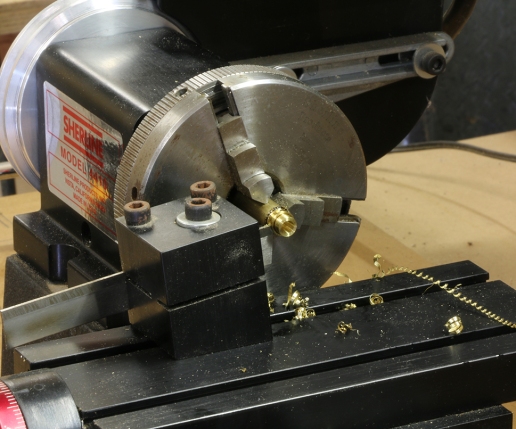 After taking my plan outside and faffing about for a while I finally started to “make some chips” (as all the knowledgeable Youtubers say) and things went swimmingly. This photo shows the process of parting off (I love that kinda talk) my first part.

No I didn’t use the Myford this time as I’ve only just managed to get some bolts for the tool post and it’s not yet operable but soon, soon! The gauges I’m making each consist of 6 parts:

– a 4M nut to retain the parts on the cap screw

– a centre gauge section that sets the distance between the rails, in this instance 16.mm

So at this stage you’re probably expecting me to say all four gauges are done and I’ve laid the rails on the curve but think again! I took so long to make this first part and sweated over it so long I ran out of time and went inside for lunch and a good lie down. 🙂

This shot shows the cap screw and nut, the spring and my end cap which is the small brass turning in the middle. The other brass object is one of the end caps from the SG gauge placed there for comparison.

Ok Ok one small brass part isn’t that impressive but give me time, I’m learnin’! Check back in December and I might have the first full gauge made 🙂