About 9 months ago I decided I was going to make a start on building a small narrow gauge layout based very loosely on the Goondah & Burrinjuck railway that operated in the early part of the 20th century while the Burrinjuck dam (in the Southern Highlands of NSW) and its associated infrastructure was being built. It was a 2′ gauge common carrier railway that was the only means of transport for the citizens of the town of Burrenjuck, a community set up to house the workers who built the dam. My model will be in 7mm O-scale (1:43.5), the same scale my standard gauge Morpeth line is built in. 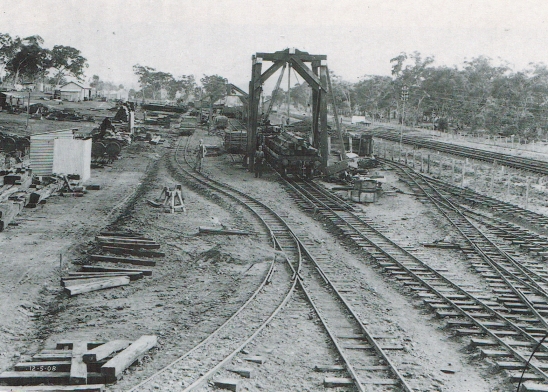 It wouldn’t be too inaccurate to suggest that this single photo was the reason I was drawn to the idea of modelling the G&B line. The availability of a kit for the diminutive Krause locos that worked the line also contributed but this crane and the associated transfer shed (which is in the background) caught my eye in a similar manner to the way a couple of the photos of the Morpeth line with it’s wharf and dilapidated line-side structures caught my eye about 20 years ago. We all know where that led 🙂

Ok great, that’s the “authorized”, long term goal statement. What have I done about it? Well not to put too fine a point on it, bugger all really! I’ve had two of the loco kits for the Krause locos for around 10 years and about 3 or 4 rolling stock kits and they’ve been sitting in the cupboard unbuilt along with a large number of unbuilt SG kits. I made a start 9 months ago by constructing a couple of ladder frames and cut up some mdf backdrops, which I slapped with a coat of white paint. I set up this base in my work room on top of some cabinets and that’s where things have stood for approximately 6-9 months. The reason things stalled for this length of time are complicated so strap yourselves in if you have the patience to read to the end.

The problems started with the Storage sidings on Morpeth. 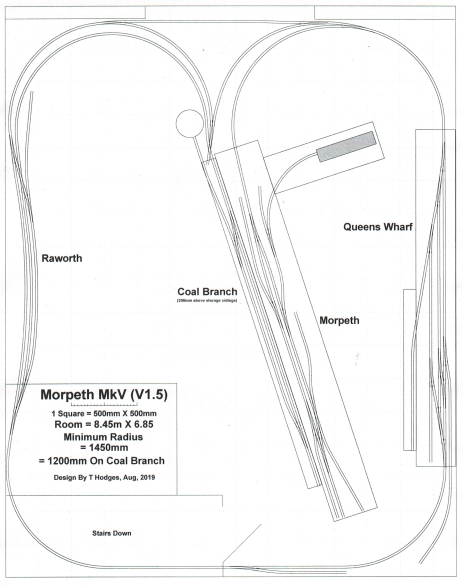 In this scan of the track-plan of Morpeth I’ve removed the storage sidings for clarity. This plan includes the coal branch and this includes siting the 60′ turntable where it will eventually reside. It’s easy to place an item on a plan but it takes actual work to shirt it there on the layout. Anyway this gives you the idea of how the coal branch will look. It will branch off from Raworth, head up the hill to the coal tipple where a loop of track and the TT will allow the train to be loaded, the loco turned for the return journey to Raworth. Simple! I wish!

Because the coal branch crosses over the approach tracks for the storage sidings I needed to have the track layout and the wiring for the storage yard completed before the coal branch could be installed and track laid on it. It was only about 4 meters long with 3 turnouts and a TT but it was the storage yards that were the problem not the coal branch. If you cast your minds back a while I decided to hold an operating session a couple of months ago and I’ve been working on a set of tasks that this threw up. This was no surprise, the same thing happened the last time I held operations on a layout, my HO layout Trundlemore in the mid 90s. However out of this process I decided that the Peco point motors had to go, to be replaced by Tortoise machines. Nine of them in all in addition to a new control panel, re-wiring and completing the wiring for the entire storage yards and also the laying and commissioning of the Millhouse River turntable that has been sitting neglected and disconnected from the rest of the layout at the end of the yard. Well I’m proud to report that as of yesterday (Thursday the 8th of Aug) the storage yard is now operational, although it is causing me some minor problems and needs to be programmed and de-bugged. But generally speaking this phase of the layout build is done. Finally! 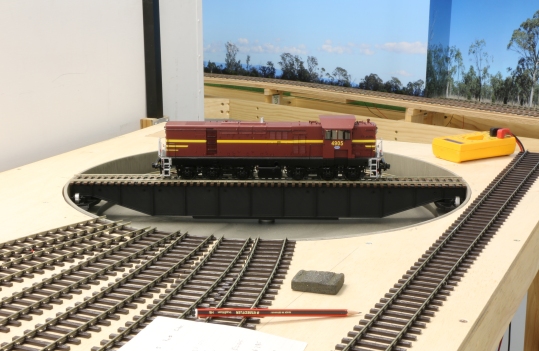 My 49 takes a bit of a spin on the turntable. you’ll have to take my word for it that the table is really moving 🙂 Video will eventually emerge of this when I can be bothered fighting with my new video editing software. But that’s not going to happen in the same month Apple is turning off iTunes!

It may just be me but I don’t move onto a new job till the one I’m working on is completed, so the coal branch hadn’t seen a blow struck in anger for months and this was because I wanted those bloody Tortoise motors installed, hooked up and the tracks all laid up to the turntable before I got distracted onto wandering up the branch. Now that that job is done in the space of one morning I cut the last of the ply base boards for the coal branch and cut and fitted it’s mdf back drop and screwed this into position. All I now need to do it make and install 2 turnouts and the plain track to connect these. Believe me, in comparison to laying the track and wiring up the storage yard this will be a doddle! 🙂 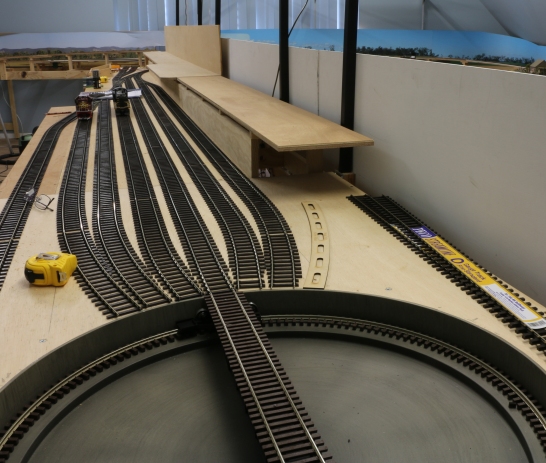 This shot shows both the completed storage yard but also the coal branch base boards, the first time they’ve both been in position together. The coal branch is the length of ply that looks like a small shelf in the upper right of the photo. 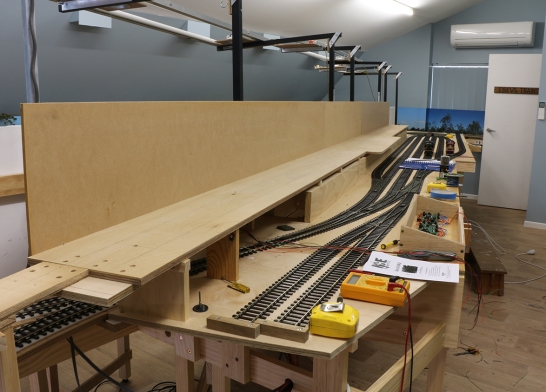 In this shot I’ve installed the 6mm mdf backdrop on the last and final board, the one down the other end, and placed them into position. The camera is approximately where the smaller 60′ turntable will eventually reside. You can see in the foreground right the box and electronics for the new storage yard control panel which will eventually be made when the parts arrive from Hong Kong. The ply that projects out over the storage yard is where the coal tipple will go when I eventually build it. I wanted to give myself a little more depth for the building at this location.

So making progress on the coal branch required the completion of the storage sidings and progress on the Goondah and Burrinjuck NG project required that I complete both the storage yard and reinstall the coal branch because until I had the size and position of the bench work and control panels settled I couldn’t be sure how big I could make the bench work for Barren Jack (the name of the NG modules). The main element of the coal branch that was holding up the NG modules was that I needed to settle where the 60′ turntable (the one on the coal branch, not the large one at the end of the storage yard) was going to be placed because the access to it would be restricted by the new NG modules and I wanted to convince myself there was enough room to allow operators to get to it and that maintenance was going to be possible.

Like a cascade of dilemmas, with the storage yard track finally laid and wired up everything else could be decided from this base point. And this also explains why there haven’t been many blog posts recently because there’s not much of interest in me swearing at non cooperative wire and solder and bashing my head on the underside of the layout. Although I have friends who would pay good money to watch video of me bashing my head against the layout 🙂 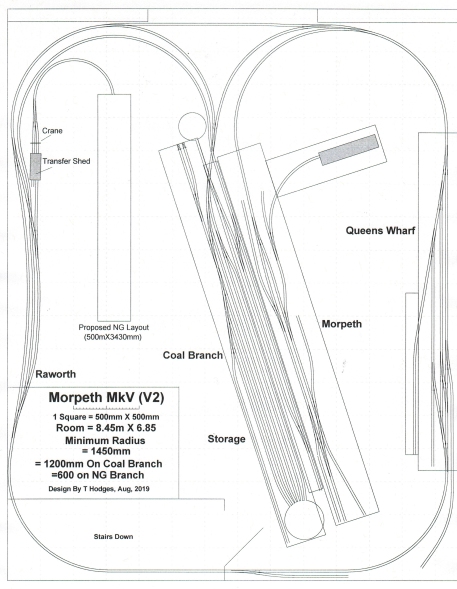 This is the plan of the complete which corrects a mistake in the location of double slip at Raworth and shows how the benchwork for the NG modules will fit. The frames I built six months ago are a little bigger than I’d prefer so I’m going to trim 60mm off the width and 200mm off the length to provide a little more clearance down the aisles either side. With lighting rig and control panels sticking out from the edges of these modules making them a little smaller is prudent.

After getting the last piece of ply road bed in place on the coal branch I moved the two wooden frames for Barren Jack up to the layout room from the work room (where I do my modelling) and set them up on saw horses to see how they would fit. As I suspected things were a bit tight so I’m going to trim a little off the length and width of these frames to provide a little more clearance in the aisles either side. 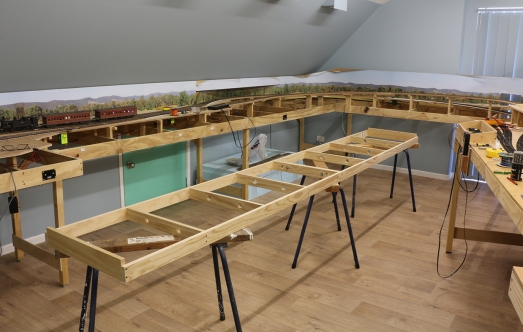 If anything this photo gives a slightly optimistic impression of the amount of space available in the aisles either side of Barren Jack. I predict that with the layout at its proper height (approximately 300mm higher than when sitting on these saw horses and about level with the bench work surrounding it on the main layout) and with the backdrop in place things will look a lot tighter. So trimming off a little excess bench work now will give me a little more clearance.

I’m envisaging this small NG line as having two parts: the exchange yard at Raworth and the Barren Jack town yard at the other end of the line. Both will have a passenger platform with the Raworth end having the exchange sidings with the standard gauge Morepth branch line and Barren Jack having a goods shed, loading bank, crane and a small industry. I haven’t yet settled on what this industry will be but I’d like to be able to use some small tipple wagons I have that were produced by Bachmann and so it may end up as a sand mine loading tipple. These would run to Raworth as a dedicated train and unload there at a site I haven’t yet settled on.

This plan is a little misleading because my layout planning software doesn’t have a NG option so this is drawn with 32mm gauge track. Still the clearances and buildings are all in scale so they will fit.

Early this year as I tried to cram all the elements I wanted onto the Barren Jack modules in the planning process. As I worked on this early version of Barren Jack I came to realize that there was no way I could fit the transfer shed and the crane over the dual gauge line into the same scene as a small passenger platform and a goods shed and loading bank. By incorporating this small layout into my main layout it gives me enough room to separate the must have elements into their correct orientation at each end of the line and it provides operators with a new “industry” at Raworth. I would have liked to make this industry a SG fan of sidings with two or three wagon spots at different industrial sidings but there simply wasn’t room. This NG option takes advantage of a big empty floor space in the layout room and will provide a new job for an operator during operations sessions as they can run trains up and down the NG line to Barren Jack and back. I call that a win all round.