I’d planned to spend some time in the layout room this morning working on the preliminaries to installing the new turnout motors under the storage sidings. However this plan took a side line after about an hour because as I worked I kept mentally adding items to a list of parts I need for the next stage of work and this kept getting longer and longer. It reached a stage where I felt I needed to jump online and place some orders so I abandoned work on the layout and trooped downstairs to the computer. Of course once I’m sitting in front of the computer I seem to get stuck and I started pulling up other files and made a phone call to my DCC guru trying to nut out a plan for how I was going use an NCE Mini-panel to allow route control on the storage sidings. I’m also in the middle of writing an article for a magazine I’ve never written for before and when I started tinkering with this I called up a track plan of the layout only to realize this was woefully out of date. So I spent the balance of the morning and some time this afternoon getting the plan up to date.

As this most recent plan drawing is an accurate reflection of what actually exists on the layout, as opposed to some vague scrawls I did a couple of years ago before I started laying track, I thought it might be worth sharing it here. I’ve placed a couple of labels at points where changes are taking place, or are about to take place, to help guide your attention to the section of the layout I’m talking about. 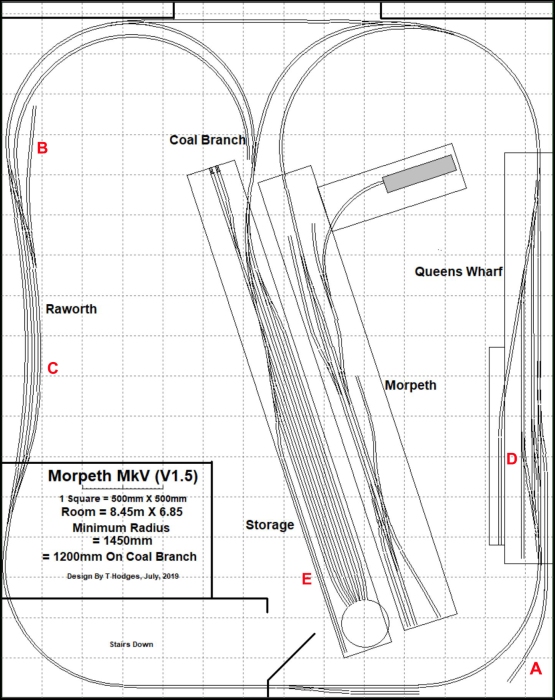 This is accurate as of the 15.07.2019. Don’t commit it to memory as it’s still likely to change. However at least it reflects what actually exists: I was shocked by how out of date V1.4 was.

A – I’d had this siding on the previous plan however it had been accessed by it’s own dedicated turnout. I removed that turnout to allow space for the loop to be lengthened in the QW yard. The siding is now accessed via the existing Morpeth dairy siding. I haven’t settled finally on what industry this siding is going to serve, however I like the idea of a flour mill as this would allow me to run a limited number of wheat wagons on the layout. There was a mill in Morpeth some years prior to the line closing but it wasn’t rail served so if I imagineer this into a situation where the mill was a success and needed to move to a bigger building a little down the line at Queens Wharf then I feel I can justify this being designated a mill. The alternative would be to make it a siding for the brick works that shipped out of Queens Wharf at one time but I feel this needs more space than I have available and possibly a couple of lines on its own dedicated siding.

B – I’ve moved the 60′ turntable from Raworth and this will be shifted up to the end of the coal branch which is where it should have been in the first place. Not having this turntable at Raworth has allowed me to fit a siding for an industry into this yard. Just like the siding at Queens Wharf I’m not sure what industry it’s going to serve yet but another dairy is appealing. I feel having a second dairy siding on the line is not only justified by the industry that existed at Morpeth at the time but it would also allow me to justify the existence of a dedicated milk/perishables train that would do a down pick up run to Morpeth where the loaded wagons would be shunted onto the pier and on the up run the empties would be picked up and hauled back to East Maitland (off the layout in storage). This would be in addition to the daily pick up goods which, from experience running the operating session a few weeks ago, has more than enough to keep it busy from the sidings that already exist on the line. And remember I’m adding sidings that weren’t on the layout when that operating session was held. I feel that separating the dairy wagons onto a separate train could be justified if there were two separate dairies on the line thus providing sufficient traffic for a dedicated milk train.

C – With the turntable gone from Raworth this opens the yard up, with the installation of a new set of turnouts and a goods loop, to some standard industries at this location. It will probably only consist of a small goods shed and a stock race but this is exactly the type of infrastructure that would have existed at this type of station and it gives the crew of the daily pick up goods another yard to shunt. Just what they need the lazy beggars! 🙂

D – This is the location that kicked off the majority of these track plan changes in a sort of cascade of dominoes, if that isn’t mixing my metaphors. By lengthening the passing loop at QW I’ve found myself spending most of my modelling time over the past few weeks pulling out work that I thought I’d completed last year. I’m happy with the way this has turned out because once these changes have been made I’ll be living with them for quite a while.

E – This is the location where I’m currently working in the layout room. While the storage lines have always been designated at this spot on the earlier versions of the plan, this version is actually what exists there now, not a vague representation of what I might one day build which is the situation with all my previous plans of Morpeth Mk5. As I’ve written here recently the most significant changes at this location are turning the turntable round 180 degrees to lengthen the yards and the addition of a 7th siding which is the dead end siding on the aisle side. This is a dead end simply because I can’t see how I can bend it at the end to get it to enter the turntable while maintaining my minimum radius curve but I may be able to squeeze something in, who knows? A dead end siding isn’t ideal but it’s better than not having it and I can possibly park locos on this or even the CPH rail-motor which doesn’t need to be turned. I certainly don’t want a siding with access to the turntable being tied up by the CPH.