The stairs leading up to my train room probably don’t qualify as leading to Heaven as such but as my train room is up there surely it qualifies as a semi-Nirvana? 🙂

Preparations for my first operating session continue… apace would be slightly misleading, let’s say preparations continue at a steady canter or trot. The only problem with inviting guests to see your layout, or in this instance to help you operate it, is that they need to be able to actually get into the room where the trains are. I can’t be the first layout owner/builder who has a layout at the end of a set of stairs, but in most instances the builder of the house in which the layout has been built will probably have supplied the original dwelling with a handrail to the room. Not in this instance.

My layout is built on the upper floor of a two level Colourbond steel (plastic coated corrugated steel sheet material) structure that I have a feeling is intended as a small farm shed with an office space/teenage retreat upstairs. The upper floor was never envisaged as the location for a model train layout but it serves this purpose reasonably well, sloping roof not withstanding. These sheds are made to a price and while the structure itself will probably outlast the house I live in, the original owners obviously didn’t avail themselves of the minor creature comforts available to the owners of such sheds, such as having lights or a handrail on the stairs installed as it was being built.

Far be it from me to cast aspersions on the participants of our wonderful hobby but not to put too fine a point on it, none of us is getting any younger. The average age profile of the hobby is going up at a fair clip and this includes the friends I have coming on the first Wednesday in June. For this reason alone the need for a safe way to get up and down the stairs is imperative and stairs without handrails would be a challenge for a group of 20 something hipsters let alone a mob of creaky old farts like my model train friends. The other day one of them asked for a chair lift to be installed. As if??!! 🙂 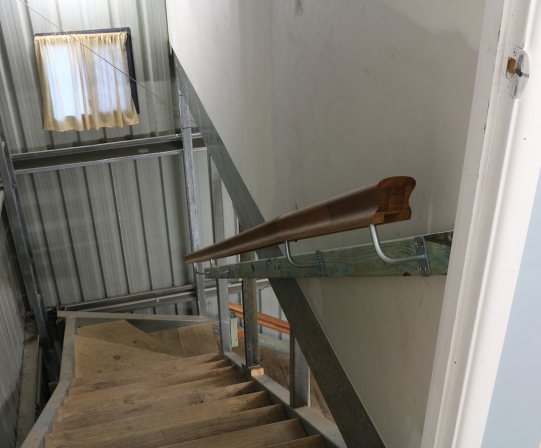 This is the view that greets you when standing at the top of the stairs looking down. They aren’t the steepest stairs I’ve ever come across but they aren’t exactly shallow either.

I decided that the very first job I needed to address in getting organized for the upcoming gathering was to install a handrail on the stairs. Not something that probably qualifies as a “train related task” in most instances but I’m convinced that unless visitors feel safe and happy when the come to visit your trains the chances of them coming back for a second visit are much higher. To be honest the last bloody thing I wanted to be doing is spending a fair wad of cash and time on installing handrails, but after seeing visitors in the past wobbling on the stairs I considered this a first order priority. And visitors aren’t the only ones who have wobbled on these stairs. I too have been a little shaky on them at times so getting this job ticked off the to do list was a must for yours truly too.

Perhaps the biggest challenge in installing these handrails is that the building itself was clearly not designed with this task foremost in the thoughts of the designers. I’m quite a fan of a Canadian reality TV show from the late 90s early 2000s called Holmes on Homes. In this show Mike Holmes goes around ripping people’s homes to pieces only to rebuild them beautifully. One of the many lessons to be learned from this show is the oft repeated statement made by the host that if you put in a railing (either on stairs or on a deck) people will naturally tend to lean on it. For this reason alone the structure of rails needs to be strong; strong enough to bear someone’s weight. I made sure as I installed my handrails that it was up to the job and solid, really solid. The term over-engineered has been applied to the things I’ve built in the past and applies to this handrail in spades. I’m happy with it even though there’s still a modicum of movement in the rail at the very bottom of the rails uprights nearest the ground floor. 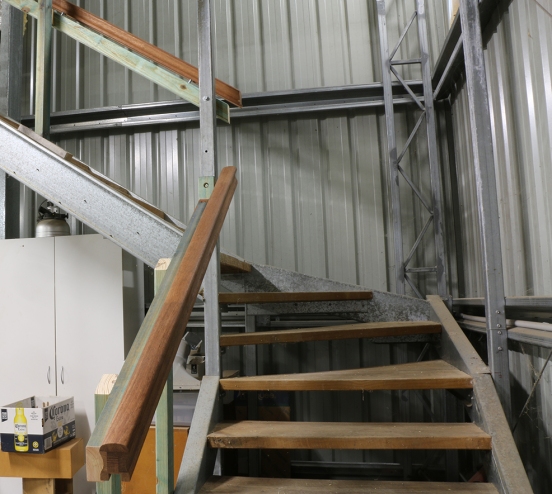 This shot shows the lower rail that leads up to the turn in the stairs about 1/3 of the way up.

I won’t go into the nitty-grity of the materials and techniques I used but will limit myself to saying that the structure was made from 70×35 & 70x45mm framing timber bolted to the steel structure. Where there weren’t sufficient posts to bolt this timber to I installed more timber to act as an anchor to the sub rail. I screwed steel handrail brackets to this sub rail and installed the bread loaf Muranti railing to these. The railing itself needs a light sand and a couple of coats of finish but this can be done over the next few days. I also miscalculated on the number of brackets I would need and have to go back and get one more of these. Even with a bracket missing the railing is as solid as I want it to be.

Now onto getting trains running on the layout again. Oh did I mention I’m going to Bali for 5 days as of the 27th of May? I’m back a day or so before the gathering in my train room. Time’s a wastin! 🙂

1 thought on “Stairway To Heaven”