About nine months ago I agreed to take Morpeth to the New England Convention in November. That’s nine months away, then six months away and now it’s less than two weeks away. A friend is booked to help me load the layout into the trailer in under two weeks and when that happens the layout has to be ready to roll because work must cease. Shiver me timbers!

As the clock has ticked and the weekend of the 17th and 18th of November draws closer I tried to make sure that all the really big jobs that needed to happen prior to departure were well and truly done. I mentioned on the blog a few weeks ago that I’d got the layout downstairs into the workshop and it was set up. Well in the intervening weeks I’ve steadily worked my way through a to do list of smallish jobs. I didn’t want to hook the DCC system up to the layout until most of the dirty wood cutting and shaping jobs were done. Well the DCC system was connected last weekend and I got the layout’s curtains hung and I have to admit that she does look good.

This shot shows the layout set up and ready for action. The DCC system is hooked up, the lighting rig installed, the new control panel is set up and trains are running.

I will admit to working at a fairly relaxed pace over the past few weeks: I had a list of jobs to finish but long experience told me I had more than enough time to get these completed and still put a bit of time into the ship which is most definitely going to accompany the layout no matter whether it’s finished or not. Then an Auscision 48 class turned up in the mail last week and I had to make a decision: if I could get a decoder installed in good time and have the loco running I might be able to take it with me to Armidale. If I couldn’t then I wouldn’t touch it and it would remain in it’s box. I had very limited time left to get done what I needed to do and the worst outcome would be to devote several hours to installing and programming a DCC decoder only to find I couldn’t get the bugs ironed out in time. I bit the bullet and decided to have a shot at installing a decoder which I had on hand and while the sound file is not exactly the correct motor noise it’s pretty close. A week after starting this job I was ready to take the loco out to Morpeth and give it a run. It seemed to be running ok inside on my test track but the bloody thing wouldn’t cooperate on Morpeth and kept stopping and shorting the DCC system on every turnout and even occasionally on straight, plain track. My instincts told me that there was something shorting across the wheels and sure enough it turned out that the brake blocks were touching the wheels faces at spots on the layout where that variations in the rails pushed the axles slightly one way or the other. A bit of judicious leverage with a small screw driver appears to have solved the problem. 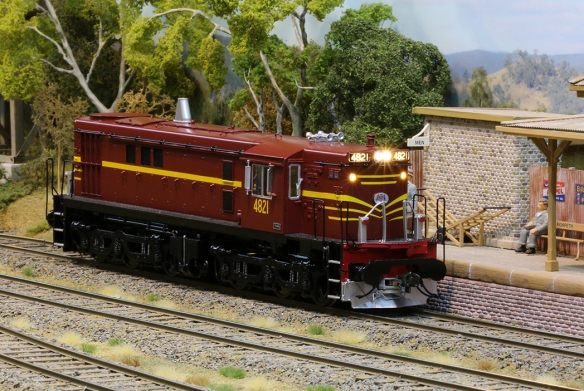 4821 sitting at Morpeth station platform. This Auscision model is a beautiful piece of work. The plug in DCC board has simplified the installation of a DCC decoder although getting two speakers into the body was still a challenge. It runs beautifully and looks the part on the layout. Auscision are to be congratulated.

Today I had another friend visit to help me lift sections of the layout in and out of the trailer in preparation for the final loading next week. I’ve come up with a way to transport all 5 sections of the layout in the four slots available in the trailer however getting them all in the trailer and secured had my friend Peter and I scratching our heads today. I think I’ve come up with an answer to the dilemma but we’ll find out over the next couple of days as I finalize preparations and start to tear the layout down.

This is a slightly different view of Morpeth from the stairs up to the first floor. I’m very happy with the way the layout looks in this mode but exhibition preparation is a lot of work!

Oh and if you’re wondering, I have made some progress on the ship but nowhere near enough for me to be happy with it. I’ll keep plugging away and post a photo of the ship in place when the layout appears at the convention in a couple of weeks.

I should thank Peter, Phil, Chris and John for their help and advice in getting the layout and the 48 ready for the convention. Any glitches, hiccups and problems have all been my doing and without their valuable assistance the layout would never have come down from its second storey home and it certainly wouldn’t have had a brand new brass 48 running on it over the upcoming weekend.

1 thought on “The Ticking Clock”