It’s been a while since my last post, not because nothing has been happening on Morpeth but because I’ve been a bit busy doing train events. It’s very gratifying putting something back into a hobby that has given me so much but I’ve got to admit that the urge to say yes to people asking whether I’d be willing to give a talk or display Morpeth has led to me placing quite a bit of pressure on myself. But a deadline is always a good thing isn’t it? 🙂

I’m delivering a talk at this Saturday’s Modelling the Railways of Queensland convention (in spite of the fact that I don’t model Qld railways) and then I’ll be flying to Sydney the following weekend to deliver another talk at the six monthly Aus7 Modellers Group O-scale Forum. However these are minor blips on my do-as-little-as-possible radar when compared to the upcoming New England Model Railway Convention in mid-November. I’ve agreed to take the layout to this event so that means I have to actually do some work and the weekend approaches at an accelerating rate. As I’ve documented here over the past month or so I’ve put some work into making a control panel for Morpeth and this is now completed and ready to be taken to Armidale and I also crawled about under the layout to make sure the portable section was disentangled from the main, permanent layout so that when the time came to move Morpeth and set it up in exhibition mode (in preparation for packing and loading it into its trailer) there’d be a minimum of work to do to get it downstairs to my workshop.

This shot shows the layout upstairs minus Morpeth which a couple of friends and I managed to man-handle down the stairs so it could be set up for me to work on in exhibition mode. The removal and set up went well although this wasn’t because of long term planning as much as due to me rushing around over the past month or so working at fixing the self inflicted problems I’d caused by being sloppy in building the new parts of the layout. The “new” parts are essentially everything you can see in the photo.

The last time I took Morpeth anywhere to display was to Sydney in 2014. The trailer that has been sitting in my garage (in a number of different homes over the years) since about 2004 has seen very little use to haul a layout, the main reason it was purchased. The layout that was supposed to fill it and be taken to shows is Morpeth. I did take Queens Wharf to a couple of events in the trailer but the long term plan was to make a layout to fill the trailer and to show it and Morpeth is that layout. After 2014 I set myself two conditions that needed to be met before I’d show the layout again; one was that I would have a 20 class loco to run on it and the second was that the layout would have to be scenicly complete. Well both of those conditions have now been met so I had no real excuse when Warren Herbert asked me if I’d be prepared to bring the layout to Armidale. I ummed and ahhed for a while but said yes: after-all the layout was finished wasn’t it? Cursed be all exhibition and convention managers! Will someone slap me the next time they hear me utter the word “yes” to their hell spawned requests please? 🙂 As anyone who has an exhibition layout knows, the word “complete” is a flexible and too easily applied term. Morpeth is finished scenicly but I haven’t spent the past 4 years getting it ready for its next show. If anything, by chopping and changing it about over those years, it’s probably less ready to show than it was in 2014. The scenery is complete but it has no fiddle yard and the pier module doesn’t even have legs! 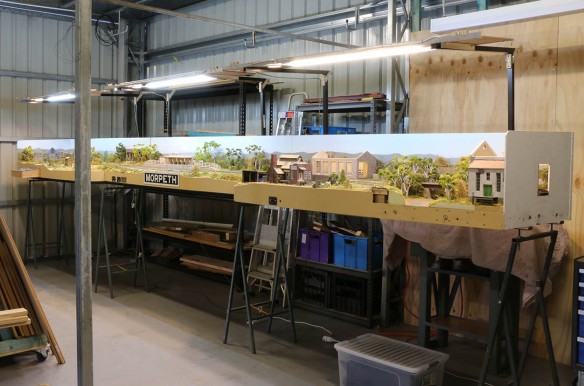 This shot shows Morpeth this afternoon set up downstairs in the shed. I’d spent the morning making a tour of local hardware stores trying to get all the items I need to make a new fiddle yard and legs for the pier and so no work has actually happened as yet. That all starts tomorrow. It may not be apparent in this photo but Morpeth sits a good 10″ higher in exhibition mode than she does when she resides upstairs in the layout room. The heavy wooden benchwork she sits on upstairs is not suitable for an innovative and nimble modern layout like Morpeth 🙂

There are a dozen little jobs that need to be completed before the layout can be packed and transported to Armidale in about 5 weeks time. The most important of these are legs for the pier module and a fiddle yard of some sort. Both of these are well in hand and will accompany the layout to Armidale. I have to reconfigure the DCC system, get my sewing skills honed to rearrange the curtains I made for the layout in 2014 and half a dozen other holes need plugging. However I know what some of you are thinking: what about the ship model that’s supposed to be tied up against the pier?

It may not look like there’s been a great deal of progress on the ship but I can assure you that a major milestone has been passed with the installation of both decks. Work is now commencing on the cabins and some details have been installed. While the kit is still a SOB to work on it now feels like I might eventually finish it at some distant point because I’m just building up layers of detail from a very difficult base. I’m still making it up as I go along half the time and have come to realize that I’d do a lot of things differently if I ever built another ship but I’m satisfied that progress is being made, even if it probably won’t be finished by the time of the show in Armidale.