Last week I started a long anticipated trip to the southern parts of New South Wales and our nation’s capital and arrived back yesterday afternoon after 6 days and approximately 2200 kilometers on the road. I had been planning on making jokes about the Leyland brothers having nothing on me but then the news last week was full of reports of their fiberglass replica of Uluru burning down so I’ve thought better of that and will play a straight bat for this report on my cross country O-scale adventure.

After the most recent O-scale forum in Sydney I approached Brian and Fran Thomas and asked if they would mind if I paid them a visit. They readily agreed and said “why not come when the Malkarra model railway exhibition is held”. I got home and told the better half about this and she responded “why are you going to Canberra in August? It’ll be freezing!” I will admit to quavering slightly but if the hardy souls of the ACT can live through winter there then so can I. I lived in Armidale for 6 years, how much colder can it be than the New England? I contacted Brendan Griffin and asked if he could put up with me for a night when I arrived in his home town of Bathurst on the way. He also readily agreed and I decided to drop in and visit a friend in Armidale on the first night when I stayed in that town. If I’d managed to find a way of spending the night in Oberon (officially the coldest town in NSW) I’d have had the full set of frigid regional centers 🙂

I packed Harriet (my little truck) and we set off. On the night of my stay in Armidale I spent some time discussing the route with my friends and they advised heading out to Gunnedah and going via Coolah if I wanted to get to Bathurst, but I’m made of sterner stuff and headed off grid (and it felt like off the face of the earth). I turned off the New England Hwy at Willow Tree and started climbing, and climbing, and I did a bit more climbing and then the tar ran out… 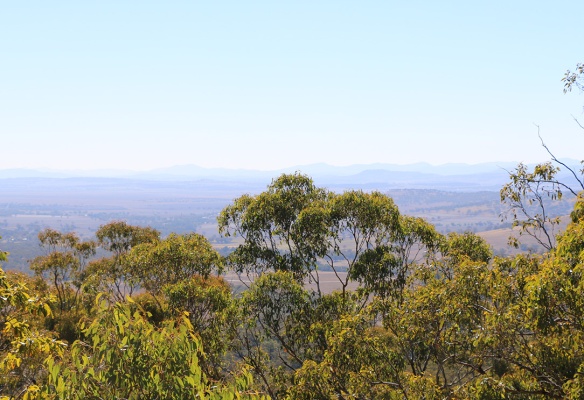 I have no idea where this is beyond the fact that the road had turned to dirt and the location is about half way between Willow Tree and Merriwa up a bloody great big mountain.

This is a picture of Harriet on the road raring to go. The only problem is that I had no idea if we were actually headed in the right direction.

After topping the ridge and starting down a bit closer to sea level I saw a road crew and asked if this was in fact the road to Merriwa and the guy said yes. “A bit further down there you’ll see a sign leaning a against a tree and it says “Merriwa 25km”. Thanks! 🙂 I did eventually find my way to Bathurst and then promptly got sent on a scenic drive over hill and dale by Google maps in the town when I turned it on. I’d told Brendan before arriving that I was going to take a photo of his layout progress to help motivate him to get something started but alas my plan came to nothing because the room remains a layout free zone. However I did snap a shot of his now famous road bridge. When my issue of 7th Heaven arrived in the mail today I read all about this beautiful model but I had one up on everyone else, I’d seen it in the flesh. I filled in the layout behind in my mind, as he hasn’t actually started building it yet 🙂

I took a photo of this model of a small road bridge that Brendan says will some day come to reside on his layout. That’s the layout he keeps telling me he’s going to build. Ah retirement, where does all the time go? 🙂

After a good night’s sleep and a breakfast that I could have climbed to the top of and planted a flag on I was off to Canberra to hunt out Brian and Fran. After a seven hour drive I easily found their place and spent a wonderful couple of nights talking trains and attending the Malkarra exhibition. I also got to see Brian and Fran’s layout and took a few shots.

This layout is big although by O-scale standards it’s really only medium in size. It’s a couple of meters longer and wider than the room I’m building my layout in and has vertical walls all the way to the ceiling! The theme of the layout is predominantly South Australian but there’s a pretty broad mix of stock on the layout with the heart of this being the scratch built stock built many years ago by Fran’s uncle.

I attended the Malkarra exhibition on Saturday and got the opportunity to insult Phil Badger and David “keep your eyes on your wallet” Low so that made driving 2200km well worthwhile 🙂 The exhibition is held in school and it’s been running for something close to 45 years in the same venue. It had a wonderful community atmosphere and some fantastic layouts even if most of them were HO. You can’t have everything I suppose 🙂

I’d like to thank Brendan, Julie, Brian and Fran for putting me up and feeding me. I had a wonderful time and only got lost a couple of times.