If you’ve been in this hobby for a while and built a couple of layouts you’ll be aware that making models of things like bridges and culverts takes a bit of planning but not just for the models themselves. I find planning out and preparing the location of a bridge is as important to a successful scene as the model of the bridge itself. Unlike the real railways, modellers have to plan the gap just as much as they have to plan the bridge that’s used to span it. I’ve spent today putting my plan for a gap I want to build a bridge over into action.

It would be fair to say that I’ve spent a good deal of time planning where the main bridge scene on my new layout was going to be located and also how I’m going to allow trains to run over this spot for the next couple of years until I’ve decided what type of bridge is going to be built in this location. The NSWGR had a number of standard designs they used to span waterways and gullies and my bridge will follow one of these designs, the most common of these being the wooden trestle.

This photo shows a fairly typical example of a NSWGR wooden trestle. I don’t know what the stats are on this type of bridge but I would guess they constitute well over 70% of the bridges and culverts used on the NSW railways.

I love the practical and robust design of the NSWGR standard wooden trestle bridge and the only bridge on the Morpeth line was built to this design. I’ve built several examples of this style of bridge in different scales, the most recent being to 7mm scale for the layout Stringybark Creek about nine years ago.

I built this bridge for Stringy Bark Creek about 9 years ago as a favor to a friend. I was happy with the result but I don’t have a photo of it with the scenery completed.

I’ve been on leave from work this week and between building and installing a wardrobe for the better half over the weekend I’ve managed to put in some time on finally starting to lay some track bed on which the first new track will be laid. Very exciting! 🙂 Of course the first place I decided to install this track bed was at the one really suitable location for the bridge I want to build so my planning over the past couple of weeks has been around ensuring that this section of track bed can allow trains to pass over it for the next couple of years and eventually allow for easy removal and installation of a bridge model when I get around to building it. The site is on a curve and subject to a 1.2% grade which, while not terribly steep, means that the bridge that will eventually stand at this spot will need to be constructed to allow for this grade change and the 1.5m curve at this location on the layout.

This photo shows the new track bed in the process of being installed. The turnouts sitting on the plywood are Peco products and are in roughly the position they will occupy on the layout.

I started work by measuring out and installing a section of straight and level track bed. Starting with this section would allow me to position two critical turnouts that I will use as a datum for the installation of the other track. The track to the right in this photo near the Saxa Salt sign on the side of the building is about 25mm (1″) lower than the point where the curve connects to the ply section the turnouts are sitting on. The bridge is going to be installed at the curve between the uprights in the right hand side of this photo. 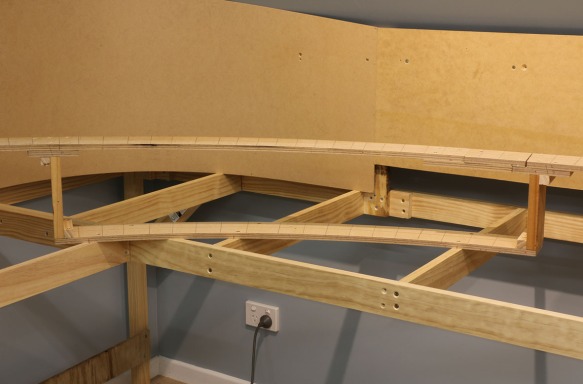 This shot shows the track bed for the bridge section in place. The ply curve shown is actually three short segments that are held in place by screws with connecting plates cut from more 12mm ply.

What I want to be able to do is lay track and get some trains running and when I’m ready, come back and install a bridge model I’ll build to fit this spot. The challenge is in ensuring that the track and track base can be easily removed so that the model can be installed in its place. I achieved this ability to remove the track bed by cutting two lengths of ply road bed and using the lower one to support the uprights that hold the upper track bed in position. I made a cut at each end of the track bed and then screwed this section back in place using four short screws in positions on the far corners of the curve so that they can be easily unscrewed, thus allowing the ply curve to be removed for replacement by the bridge.

I’ve unscrewed and removed the track bed in this photo to illustrate the way this allows for the later installation of the bridge model I will eventually make for this site, if I can settle on a style of bridge I like 🙂

1 thought on “Building The Gap To Bridge”