I had an interesting weekend attending the AMRA’s Liverpool exhibition in Sydney on Saturday. I was going to spend some time out at the exhibition on Sunday morning too but decided to head into the city to buy some books from my favourite bookshop Abbey’s. So why would I want to browse for books about William Tecumseh Sherman and the 1969 Rugby League grand final between Souths and Balmain rather than spend more time playing trains? I do have an excuse in that as an 8-year-old I lived two doors down from one of the Balmain players who played in that game but I’ll admit I’m strange. I committed to taking Morpeth to next year’s exhibition to the exhibition managers although one of them responded with “Morpeth, where the hell’s that?” The price of fame hey? 🙂 I arrived back yesterday (Monday) about lunch time and have spent a good deal of the intervening time since sleeping.

I had the pleasure of dropping the better half off at the airport this morning at an ungodly hour and on the way home thought I’d drop into Bunnings to pick up a keyhole saw and some plastic drop sheets for my ongoing struggles with layout lighting. I was sure I already had a keyhole saw but couldn’t find it so I had to get a new one. Creeping senility is surely to blame for this failure of memory or perhaps not: the other saw is bound to turn up in the next couple of days now that I’ve bought a new one. These purchases came to the grand total of $6.50 and I told the lady at the checkout this was the lowest amount I’d ever managed to spend before escaping from a Bunnings store. She just laughed at me but I wasn’t joking! 🙂

I’m sure that what I call a keyhole saw has many other names in different parts of the world but it’s essentially a sharp, thin bladed tool designed for cutting holes in plasterboard. It’s far too big to cut keyholes with but that’s what my father used to call it and my new one (my new saw not my new father) only cost $4.25 and it works a treat! Of course the less said about why I needed such an implement and the role played by another bloody tradie the better!

Yes, yes I know this is just a photo of a hole but that’s my brand new ceiling the hole is cut into and a picture always tells a story! And in this case the story is that my bloody electrician insisted that he needed holes behind the light boxes to fit his hand through so he can install the down-lights!

If you take a look at the photos in the previous post you’ll see that I had drilled a nice neat little hole in the back of the box I’d hung as a test to allow the passage of wires for the down lights. In that installment of the blog I was about to meet with my electrician Craig the next day to discuss the design and installation of the boxes. Well we did meet up and he immediately said “Mmmmm!” which is never good coming from a trades person because it either means it’s going to cost you money or it means having to do something you’re not going to like. In this case it meant that there wasn’t room inside the light boxes to fit the lights he planned to install so he needed a hole cut so that he could push the down-light’s transformers into the ceiling so they weren’t sitting on top of the backs of the lights. “How big?” I asked referring to the hole, to which he replied “big enough to fit my hand through”. It was on the tip of my tongue to say something cutting about him having hands of similar dimensions to Donald Trump but I kept my comment to myself. I bit my tongue, bit back my comment and swallowed my pride! I thought my boxes were pretty nifty and here I was faced with the prospect of major surgery.

I’m glad I resisted the temptation to install any more of the boxes on the ceiling because the 12mm ply back plate of the boxes also had to have the same hole cut in them and this couldn’t be done once installed. I needed to get the one I’d installed off the ceiling (no small task in itself) and cut a hole approximately 12cmX9cm into the back of each box. All of those I’d fitted sides to had to have these removed (about half of them) so I could make the required cuts with a jig saw and then have the sides reinstalled. I then had to fit sides to those I hadn’t started and fit the pelmets to all of them. 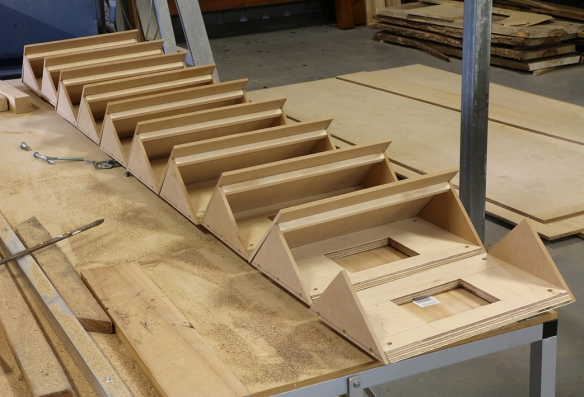 All ten light boxes completed and ready to install on the ceiling upstairs. Note the new, large holes cut into the ply back plates. I can easily get my large, masculine hands through these holes so I’m sure Craig my electrician can get his dainty little digits through! 🙂