On an evening when I can hear rain pouring down outside, my landscaper has finally put my yard back together after it almost washed away a few weeks ago and when I’ve been on the phone to a builder about coming to fix the leak in the roof of my train room I thought it appropriate to post that I’ve finally managed to do a little modelling over the past week. My modelling’s been affected a lot more by flooding rains than droughts over the past couple of months but I wouldn’t put anything past the weather at the moment ! 🙂 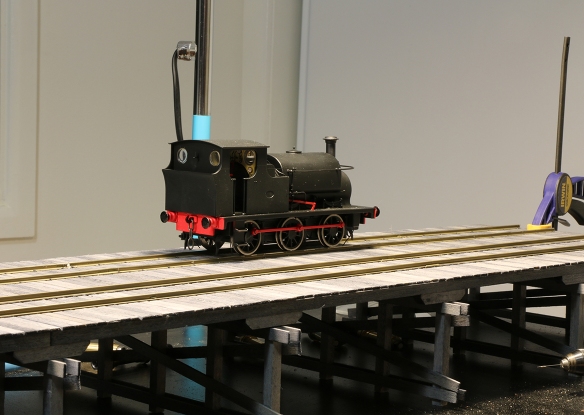 You’ll have to take my word for it that this little Ixion loco ran out to the end of the pier under its own power. And it can get back too!

The amusing part about picking up my modelling threads after a break for a house move and a few big weeks at work is that I started at exactly the same point I’d left off. I got the pier’s deck glued down a couple of weeks ago and I’ve gradually been laying rails out to the end of the pier. To be honest this photo is a little misleading in that I’ve only spiked down the rails on the far length of track. the two rails at the front are just sitting there waiting to be fastened permanently. I’ll get to that when I get sick of watching the Hudswell Clarke running  the 6′ out to the end of the pier and back 🙂

1 thought on “Neither Drought Nor Flooding Rains…”