After a fairly drawn out process of moving house I’ve managed to spend a couple of hours modelling for the first time in about six weeks. I’ve moved into a larger place and have options that weren’t available in my previous home however for the time being I’ve decided to use one of the spare bedrooms as a modelling space. A leaking roof into an unlined space in my new shed has put paid to any thought I may have had of setting up a modelling space there (see my last post).

This spare bedroom provides me with a modelling space that is very similar to the one in my previous home. The difference being hardwood floors rather than carpet and slightly more floor space.

The one great advantage of a modelling room inside the house is that it provides a comfortable, clean, dry and climate controlled space that keeps one in touch with the rest of the household and doesn’t require a trip across the garden to reach. The downside for me is that every time I need to access a tool that’s too messy to have inside the house I need to make a trip across the garden. Unlike my previous home the new place doesn’t have an attached garage.

After a lot of time spent over the past few weeks settling things in place, putting up new shelves, coping with being flooded in for three days with no power and starting to sort out my new workshop (my new shed has a large workshop space for my tools and woodworking/metalworking machines) I decided it was time to start doing a little modelling. So it will come as no surprise that I picked up exactly where left off a couple of months ago and commenced doing the final assembly of the main pier structure. Because the piers legs are already glued in place on the surface of the “water” and the top is a separate component, I needed to settle on a way of securing these two elements together while allowing me to run wire invisibly from the rails that will sit on the pier’s surface down below the water. I had to run the wires prior to the top surface being secured in place because there isn’t enough room under the structure to get my hand in to poke wires around. After thinking through all sorts of schemes for attaching the top to the legs I decided to glue it in place with PVA and run the wires down behind an upright timber leg. With the wires in place, the rails attached to these loosely sitting on top and the glue dabbed in strategic spots I positioned the top and piled on some weights to keep it all in place while the glue cures. 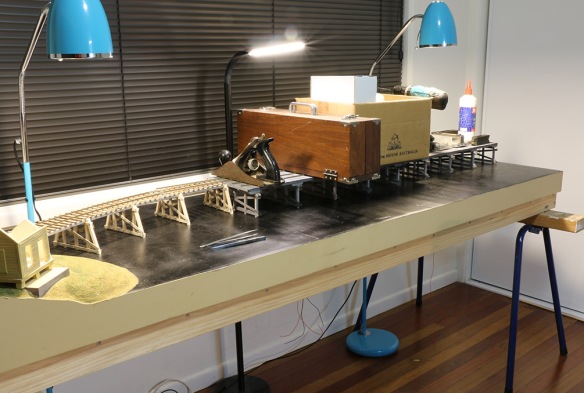 I find it fascinating that you can never find enough weight for the tasks you need at the critical moment. I’ve pressed into service my wood plane, a box of toy cars, my first scratch built locomotive in its wooden carry case and a range of other heavy objects to ensure that the top of the pier is held to the legs while the glue sets up.

The glue will be given overnight to set and tomorrow night I’ll start laying the rail direct to the pier’s wooden surface. Later I’ll come along and install wooden piers along the sides of the main structure. Through these I’ll drill small horizontal holes into which I’ll insert short lengths of brass wire to physically hold the pier’s surface in place. The glue will probably be sufficient to hold everything in place but I like a physical method of securing things in addition to glue.

After I had the weights in place the house’s new resident came in and made her presence felt by deciding my wiring would make a good game. 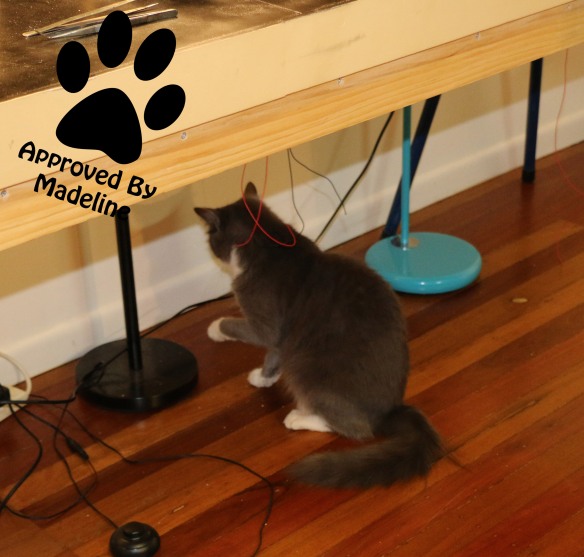 Madeline is already making decisions about what parts of my hobby are interesting. Until today the top of the layout module seemed to be a fairly attractive place to explore but tonight the wires underneath attracted her attention.