Last weekend came the time to bite the bullet and move Morpeth to its new home. A relatively hot real estate market has resulted in the sale of my current home (after the place being on the market for approximately 12 hours) and so I’ve got to actually move my belongings to the new house, not just think about it and dream of having a layout set up and running in my new layout space 🙂 I’d actually got the third scenic module to the stage of essentially being “finished” and built the track-work across the gap between it and the next module. So the first order of business was to unbolt them from each other and move the creek section out to my dedicated layout trailer. Now I need to point out that the trailer is dedicated almost exclusively to the storage and transport of my layouts, except when I’m moving. When a move is in the offing I have to remove the layout from the aluminium rack built to hold it and then remove the rack so the trailer can be used for the far more mundane task of moving my books, tools, kitchen paraphernalia and extensive teddy bear collection. I’m just kidding about the teddy bears: my mum collected them when she was alive and I have one or two favourites left over from the vast crowd she owned 🙂

As a small boy I seem to remember a joke that went something like: why aren’t Irishmen good at water skiing? Because they can never seem to find a lake steep enough to ski on (tish boom). Well I think I’ve got the solution to their problems! 🙂 I needed to manoeuvre the creek module out of the spare bedroom where I work and the best way of making space was to lean the river module up against the wall out-of-the-way.

So the plan was to get the three sections of the layout that were making the trip into the trailer, drive this over to the new house and then unload them and the rack into my big new shed. Simple! Well it would have been if all three sections that needed to be transported had already been in the trailer but they weren’t: one of them was sitting on two saw horses in the spare bedroom I use to work on my models. This section needed to be loaded into the trailer, along with its attendant lighting rig before I could make the trip. And as I’m on my own at this end of the journey I had to get it out of the bedroom, through the house and loaded into the trailer on my own. The thing was far lighter and more wieldy when I carried it in there, I can tell you! 🙂

Actually this isn’t a shot that’s half way there: it’s actually more like a quarter of the way to the trailer. It still needs to travel across the living room floor, down the hall and out into the garage!

After some grunting and careful footwork I managed to get the layout segment out to the garage and propped up against the back of the trailer where all I needed to do was lift one end and slide it into its alloted slot. Easy! 🙂 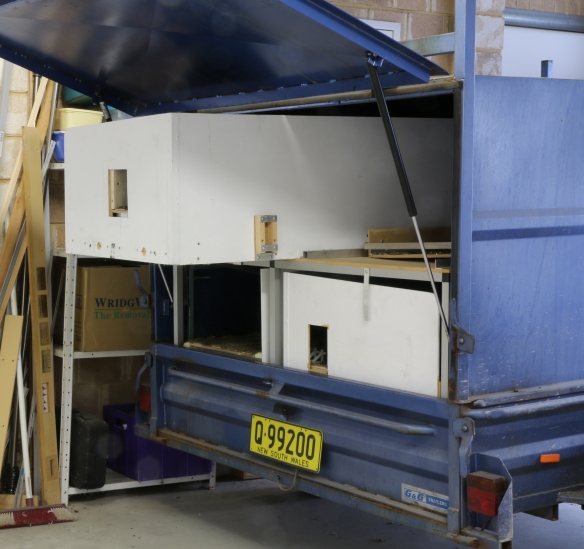 This shot shows the layout almost ready to be transported. I left it sticking out to show which piece I’d loaded into the trailer.

So after almost giving myself another hernia I managed to get the layout segments being transported into the trailer, hooked it up to my car and hauled it the 100km to its new home. My friend Phil agreed to put off consuming a third or fourth latte at his favourite cafe and drove over on a beautiful Sunday morning to my new house where he helped me unload and store the layout. This entailed getting all three sections out of the rack, pulling the rack out of the trailer and then sliding all three sections back on the rack. Thanks Phil 🙂

The layout isn’t set up ready to run trains on, that’s months (if not years) away at this stage. It’s forlornly sitting on the floor of my workshop, probably having its foliage nibbled by rodents as I sit here writing this, a good hour’s drive away. For the next 6 or 7 weeks, as I go through the drawn out process of shifting my possessions from my old home to my new place, I have the river module and ship to work on. Hopefully I’ll be able to get a little time between work and the move to do some modelling.

2 thoughts on “Morpeth’s Big Day Out”