After quite a long wait the latest Auscision offering, the NSWR 45 class, arrived at my local post office yesterday afternoon and I happily trundled down over to pick it up. I ordered and paid for this locomotive quite a while back, but I’m not sure how long ago this happened. You get a discount if you order and pay Auscision up front, which is fine except you’re then captive to the vagaries of the production process along with the manufacturer. In this case my unreliable memory tells me the 45 has taken quite a bit longer to deliver than either of the two previous Auscision offerings, the 44 and 49.

My first impressions of the loco are extremely positive. The paint finish is excellent and the detailing of the body and chassis is of a very high standard. This is no small feat in a locomotive of this size and complexity. Items of note are the operating chain line above one of the bogies (I couldn’t photograph this as it is very dark and wouldn’t come up in the photos), the step and staff exchange lights and the fact that the vents have detailed view blocks behind them so you can’t just see through the body to daylight on the other side. 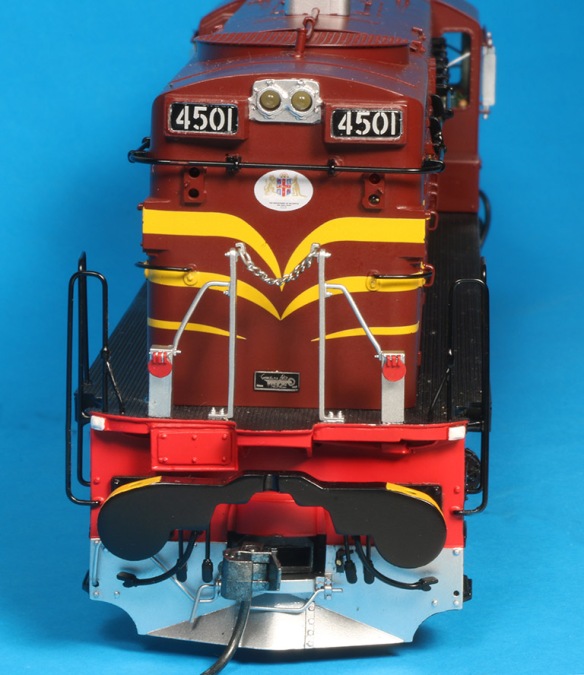 The number boxes light as do the marker lights but then this is a feature of HO locomotives these days so is not quite as noteworthy as it used to be. I suppose with the extra space in a 1:43.5 loco you expect a manufacturer to go a little further and working headlights and number boxes are just “standard”.

One of the best improvements I’ve discovered in this loco over both the 44 and 49 is the absence of the rubber tubes used in previous offerings in the drive chain. This very second-rate system has been replaced by all steel universals between the gearboxes in the drive system. Well done Auscision!

After witnessing what happened to a friend’s 49 on Arakoola I’m pleased to see Auscision seem to have fixed the problem by replacing the rubber or propylene tubes with steel universals. A much-needed improvement. The gearboxes in my loco were bathed in oil which I’ve wiped away so that it doesn’t get everywhere. I really can’t see the reason for this as it was the same with the 49 is in my opinion is unnecessary. When you pick the loco up you get oil on your fingers and this is bound to end up on the body.

As noted in another forum by John Parker the running qualities of the locomotive are excellent and he says the current draw is very low so the motor is likely to be of high quality and well beyond the “washing machine” motor that was supplied in the 44. Those of us who use DCC will await John’s pronouncements on what’s inside once he peeks under the hood. There is a small, removable panel on the top of the loco (mine actually fell off and will need some adjustment to make it fit securely) but this seems limited to use by those who stick with a DC loco.

I’ve shot a short video of the loco and posted it on YouTube. Most of the jerkiness apparent is due to the challenging lighting conditions as my camera struggled to cope with a back-lit scene.

While Auscision are to be congratulated on the production of this outstanding loco they don’t seem to have entirely overcome one of the problems encountered with the production of the 49. Mine arrived with some minor damage and I’m currently in the process of deciding what to do about this. 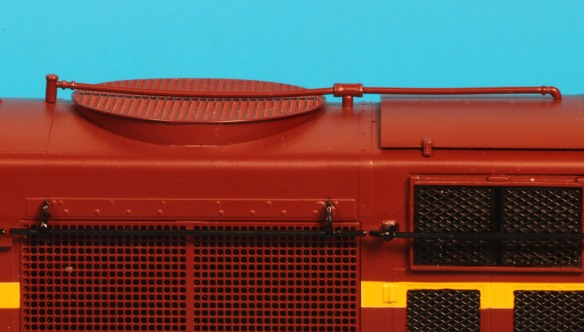 This pipe appears to be bent and while it will be a minor matter to fix, its hard not to assume this occurred at the same time as the other damage to the loco as it is in the same general area. 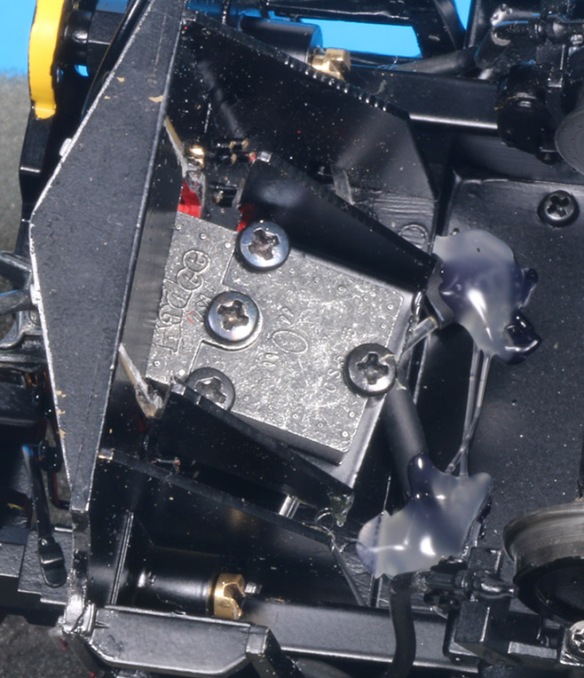 A far more serious bit of damage was to the coupler pad on the long hood end. This has been completely detached from the front end presumably by being dropped. As the part was soldered to the body the drop must have had considerable force.

After checking the locomotive over it became apparent that there was something wrong with the coupler on the long hood end. When I turned the loco over I found that the coupler pad had been broken off the body in transit. As this part was originally secured by a fairly long bead of solder I can only imagine the force of the impact that would have been needed to achieve this result. I’ve been fairly diligent in checking to see if any other damage resulted from what must have been a fairly heavy impact but I can’t find anything aside from the bent pipe over the fan vent, although there is some minor bending of the cab mirrors, a similar problem to the damage wrought on my 49 when it arrived. While it’s great to see Auscision using genuine KD couplers in their locos this is somewhat offset when the pad they are attached to is sheered away from the body. The packing of the 49 was clearly iunadequate and the problem does not seem to have been entirely overcome in the 45. Time for a rethink Auscision?

I haven’t heard an upswelling of complaints on the Yahoo forum I moderate about damage to people’s locos so with any luck I may be in a minority. I can fix the damage to my loco myself although fixing the coupler pad without damaging the silver paint on the long hood end will be a challenge. I think I’ll let the manufacturer know about the damage even if I do decide to fix it myself.