I’ve been home a few days but have only managed a couple of quick sessions on the layout since arriving back. Some rodents decided the wiring in my car was edible so I found myself with a lot of running around to do to get it back from the mechanics. Still i managed to get a little done and the work has mainly focussed on getting some basic ground cover down and introducing some built details into the landscape prior to shrubbing up the landforms and finally completing the 3rd module. 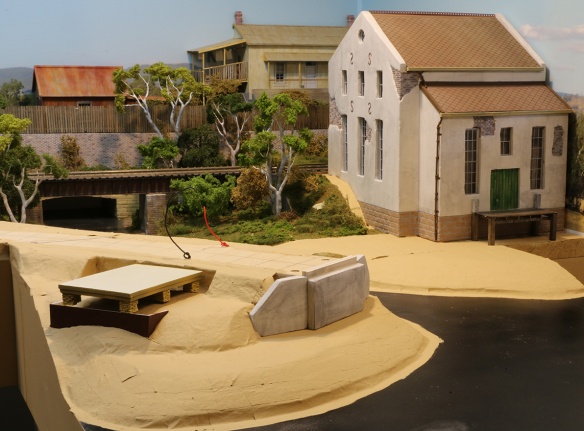 After covering the extruded foam that forms the terrain with my preferred covering of small squares of paper towel I painted it the base yellow colour I reserve for this stage. Same routine I’ve explained on the blog a couple of times. The same colour is under all the landscape and is used as a fascia colour. You can see the pier abutment and the foundation for the gate keeper’s hut in this photo.

I like to introduce small huts, fence lines and other man-made objects into most spare corners if there’s space. I’m not all that interested in modelling the rural landscape, I find it fairly “samey” so I make an effort to fill spare corner with objects. This also serves to reduce the number of trees I’m required to use and as I won’t make my own this saves me money because if there’s a building on a piece of layout it doesn’t need a tree! 🙂

Being the inveterate kit buyer that I am quite a few years ago I purchased a Berkshire Valley Train Crew Shed thinking “that will fit nicely in a corner of a layout somewhere”. I can’t remember how many years have passed since I bought this kit but the “corner” has finally turned up in the shape of the small triangle of unoccupied land formed by the approach to the pier. The foundation of the small hut comes as a pre-coloured foundation and I’ve plonked this down in the spot reserved for it. When I cut the foam back to make the landscape reasonably flat I didn’t have quite enough space for the building where I’d intended it to be so I had to build up the front with a small foundation wall. This is the dark red sitting proud of the landscape in the photo. I could have made this quite a bit longer but I like the idea of this hut sitting precariously on the edge of the river.

Prior to going overseas I was again swapping emails with Gordon Gravett and as a past ship modeller he offered any assistance he could provide and I mentioned my lack of a suitable bollard to tie the ship up to the pier. When I got home a small package was sitting in the letter box which contained a number of two different types of bollard. They aren’t the same type that were used at Coffs Harbour but they’re more than adequate for the task. Mr Gravett is a real gentleman. 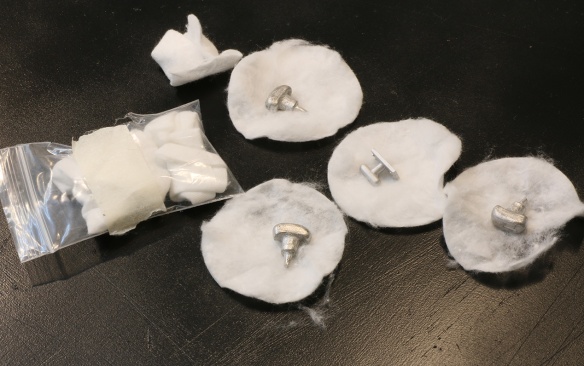 The two types of bollard sent to me by Gordon Gravett will look great on the pier. All I now need to do is work on my knots to learn how to tie the ship up. I’m bound to get it wrong and some old sea dog will make an adverse comment.

I managed to make some progress today bt applying a base coat of ground cover and getting the pier abutment and hut foundation coloured and installed. I also glued a line of fencing along the edge of the track and finally glued the small landing “pier” in front of the mill building I recently described here. It can be seen in the photo above sitting the wrong way round, prior to being glued in place. 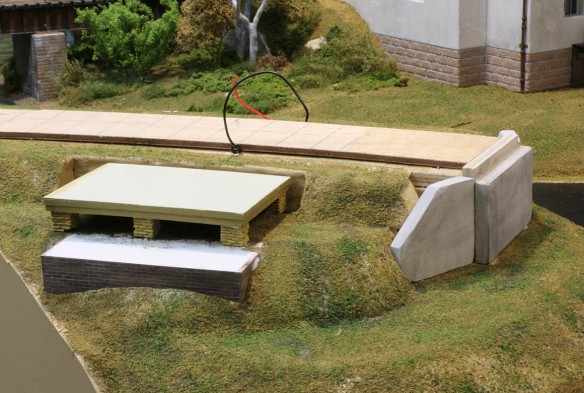 These two scenic items are the final stage of the “hard” landscaping I need to install prior to the landform being covered in trees, weeds and scrub.

I spent an hour or so this evening gluing in the abutment and foundation wall and then filled the gap behind the foundation with some spak filler and took the photo above. I’m going to be busy moving into a new home over the next few weeks starting this Wednesday so progress is likely to be very patchy in that time. I’ve quite deliberately not rushed into building the piers for the jetty because once I get into this part of the project I know from past experience that everything else will get neglected. I want all the landscape to me finished before moving onto the next stage.