I’ve been referring to this version of Morpeth as Mk IV to myself through such things as labelling the folder where the photos I’ve been taking have been stored on my computer. It’s far too complicated to outline the details of Mks I to III here. I’ve made reference to the earlier layouts and iterations of these layouts on this blog but I wouldn’t bother trying to hunt these posts out, that’s all ancient history now. What is worth mentioning is that I did a lot of work on Morpeth in the lead up to the Aus7 ExpO which was held in March 2014. I worked on the layout quite intensely in the lead up to that show and once I arrived back home the layout sat essentially untouched for a time before I decided to try installing it at home as a semi-permanent layout. I made some damaging changes to Morpeth Mk III to get it to fit and then personal circumstances led me to selling the house I as living in at the time. So these half-implemented plans went from being planned changes to planned damage. As a result of moving house I packed the layout in its dedicated trailer, towed that across the range of hills that separated me from my old home about 100km away and there it sat, inside the trailer while I built my Z20 class locomotive and put some rolling stock kits together.

Now you might ask why it’s taken me so long to start working on the layout again, especially as it was approximately 75% complete in March 2014. It would only have taken a good push along for another 12 to 18 months to get it “finished”. This is a very pertinent question. Perhaps the most important thing stopping me from pushing straight on with finishing Morpeth was the June 2009 issue of the Australian Model Railway Magazine magazine which has a very nice photo of my previous layout, Queens Wharf on is cover. I’m very proud of this cover as it was the first that featured a layout built by me, so proud in fact that a framed copy of it hangs on the wall above my workbench. Now while I’m proud of having my layout on the cover of what I consider to be Australia’s premier model railway magazine there is something that grates with me and it’s that at the time the photo was taken I didn’t own a steam locomotive that could be used in the photo. As such the 32 class steamer that does appear was borrowed from a friend. Now there’s nothing wrong with the 32 class (thanks for the loan Paul) and I actually don’t have a problem with someone else’s loco appearing on my layout in a photo on my first and hopefully not my last magazine cover. However I do have a problem with the fact that I hadn’t yet built a steamer of my own that could have been used. Not because I couldn’t build one but simply because there always seemed to be other things (both modelling and life things) to be getting on with. At the time the cover appeared I made a promise that no layout of mine would ever appear in public again without at least one steam loco built by yours truly gracing its rails. I had to make an exception for the Aus7 ExpO in 2014, it was initiated and organised by the O-scale modelling group I happen to be president of. 2002 was and my 19 class loco are the result of that resolution to build some steam locomotives.

So we get to 2014-2015 and I’m implementing a plan to install Morpeth at home as a “semi-permanent” layout and just after I chop 150mm off the end of one of the modules and rearrange a couple of the buildings’ locations personal circumstances lead me to come to a full stop! In the house move I also managed to drop a desk lamp on one of my buildings doing a pretty thorough job of rendering it back to its constituent components; some paint, a large decal and of a pile of plaster chips and dust.

I have a bit of a weakness for building kits and this is an “in progress” shot of the original brick building that sat on the bank at the rear of module 3. It started life as a Downtown Deco building marketed as Archie’s Bar. On my layout it first of all became a billboard for Rosella tomato sauce and then it became a pile of plaster chips after I dropped a desk lamp on it! After it was damaged I decided it couldn’t be saved and I tossed it in the bin.

This past few days I’ve reached a bit of a milestone in that I’ve managed to get back to where I’m not just fixing planned damage on Morpeth but actually starting to make some genuine progress toward finishing the layout and getting it ready for a public showing. One of the biggest changes I’ve been planning to make is to turn my train turntable from its original purpose into a 4th scenic module. This module appears on the plan I posted a couple of days ago and it consists of a 2mX600mm slab of river that will eventually hold a long wooden trestle up on which will sit a ship model I’ve had stored away for about 5 or 6 years and onto which I have been dying to get my hands!

This photo shows the train turntable in the process of being dismantled. I’ve already removed the table and other hardware and soon will move onto cutting down the sides and installing a solid table of 7mm plywood which will serve as the Hunter River’s surface.

The change of use for the module in the photo above is not that the turntable didn’t work, in fact anything but: it was a remarkable success. However it was big, unnecessarily big in fact, and required one full parking slot in the trailer that houses Morpeth. In thinking over what I wanted to do with the layout and what possible redesign work could be carried out on the train turntable, I made the decision that I could make better use of this module as a fully scenicked entity and that a new slimline train turntable could be made and fitted into one of the 100mm high utility slots at the bottom of the trailer rack. I have convinced myself that I can make the train turntable work in a slim form, all I have to do now is make it. That will happen further down the track. 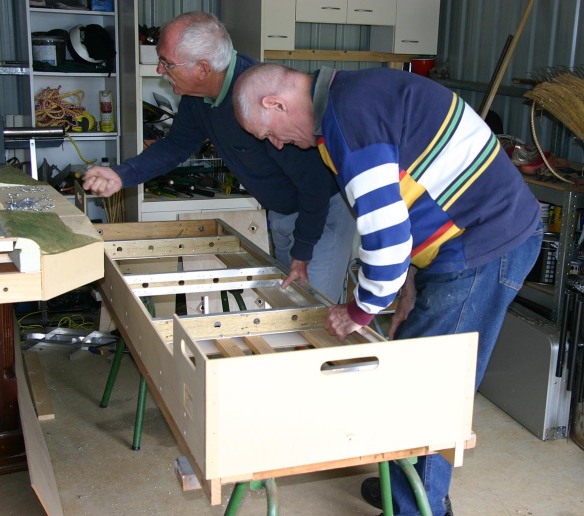 Peter and Phil, two very hard-working friends of mine dropped by on Wednesday last week to give me a hand on re-purposing the turntable module. I was a little worried I wouldn’t get everything done in the two days I had available for this work but, with their help, we got the whole job done and even had time to dawdle over a cafe lunch. Thanks guys, I never would have finished this on my own.

The work was carried out at my partner’s home in her double garage as I don’t have the space to carry out such work in my abode. The only problem with working in her shed is that there’s no power or lights in the shed so taking decent photos is a bit of a challenge. The work went swimmingly and by the end of the day we were able to pack the new module back in the trailer ready to be hauled back over the range. 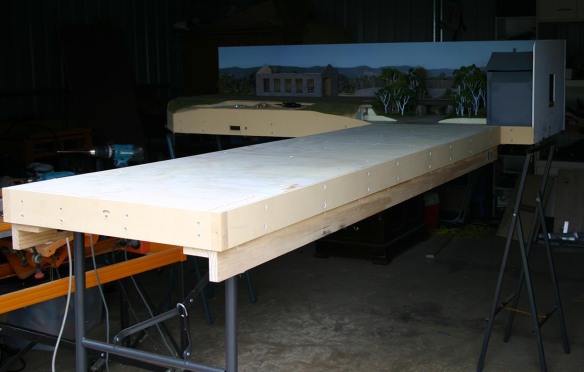 While you have to squint and squeeze your imagination really hard to see it this module will eventually come to represent the Hunter River. Module 3 can be seen in the background at right angles to the re-purposed turntable module.

Over the past couple of days since arriving home I got some wiring upgrades done on the station module before I packed it back in the trailer. This is the module with the Shell Depot on it that I posted about last week. While some track needed to have wires reattached I also wanted to cut some rail gaps and install some NCE BD20 block detectors that I plan to use in conjunction with an NCE Mini-panel to allow a couple of locomotives to shuttle back and forth on the layout. The plan for this is that I would like to be able to have the option to have something moving on the layout automatically to take the pressure off the operators at exhibitions. With block detectors and a bit of basic programming I should be able to have a small tank loco shuttling back and forward on the pier and a railmotor doing the same thing from the fiddle yard to the station. Spending 3 days moving trains back and forth on a fiddle yard to terminus layout gives you a new appreciation of tail-chasing layouts.

So today I swapped module 2 for module 3 in my workroom and got to work looking at what I needed to do to complete this module before I could move on and get to work on the pier and ship models, to say nothing of the yet to be built slimline train turntable.

I have been aware for the past 3 or 4 weeks, as this stage in the layout work approached that I would need to start by finding a replacement for the brick building that originally stood on the bank a the rear of module 3. I’ve decided that the Outback Model Co kit of the small country church would fit the bill. This photo shows a test of the kit in the same spot after a bit of judicious scenery “remodelling”.

I’ve lived all over the state of NSW in the past 30 years and I’ve seen at least 5 or 6 examples of the church that is represented by the Outback Model Co’s kit of St Agnes’ church. After taping together walls of the kit with low tack blue masking tape I plonked the resultant box in the space left by the previous building. It is perfectly sized for this small space: very Australian and very appropriate for this space.

This recently repainted church is just one example of the St Agnes’ kit produced by the Outback Model Co. It fits the site perfectly when this was made vacant by the damage to the previous building. This example is situated in Nevertire in central west of NSW.