Well I got my free lunch out of Bruce last Saturday and the 20 wasn’t even really finished. I flew down to Sydney on Friday evening and stayed overnight in a hotel before driving out to Nth Sydney Leagues club on Saturday morning with the locomotive in my backpack. I always love watching the reaction of the security staff at the airport when they see the stuff I put through the screening on these occasions. I was watching as the lady sitting at the machine looked closely at the screen and then backed the bag up again to take another look before looking over her shoulder at me and asked “what is that”? Her reaction was a hell of a lot more priceless than an Amex card 🙂 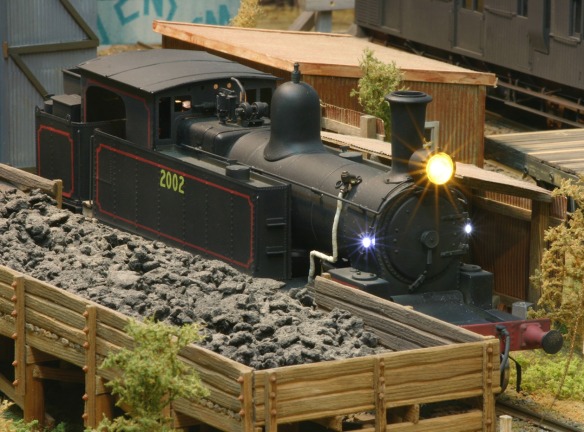 You can clearly see the marker lights working in this shot. The loco is still in need of a coal load however.

What I hadn’t had time to install prior to my trip on Friday was the bi coloured LEDs in the front marker lights, the MV lenses on the headlights and the coal load. The photo above shows I’ve now installed the marker lights and the MV lenses are in place both front and rear. I’ll do something about the coal load over the coming weekend and then the loco will be officially “finished”.

I’ve really enjoyed building the 20 but I’m well and truly ready to make a start on something else. Bruce reckons we made our wager 9 months ago and that’s a long time for a single modelling project. As I’ve written here before, I work on one thing at a time so I’ve done nothing else but work on the 20 for all those months and I’ve decided that the next project is going to be some new work on my layout Morpeth. A friend of mine who is involved in a project to ship an enormous layout to the UK this September challenged me to get Morpeth ready in time for the Liverpool exhibition in Sydney this October. I might be crazy but I’m not dumb: it makes perfect sense to me for 7 or 8 blokes to spend a fortune on shipping a layout halfway round the world and back so some poms can whine about the GOG “subsidizing” a group of Aussies on a UK “holiday”, but it makes no sense to me to attempt the impossible and do 3 years work in six months to get Morpeth ready by October. OMG! If only they knew! I was talking to another friend involved in the project to ship the layout over there this past weekend and I swear I could see his already thinning grey hair get thinner and greyer as we spoke about what he’s putting himself through. He used to be a school principal so he’s tough 🙂 However, taking a leaf out the wacky play book of the Arakoola group, I’ve decided to challenge myself to have Morpeth ready to show at an exhibition by Oct 2017.

Is 18 months a real challenge? Well I’m not kidding when I say there’s about 3 years work left to do. The buildings are mostly in place but there are still two major structures left to complete from scratch and the goods shed is still a long way from being finished. What I’ve decided to do is get the section you can see in all the recent posts on this blog (section 1) completed and when this is done move onto section 2. Both of these have the least work to do and I can probably have them completed within a couple of weeks. Sections 3 & 4 are another matter however.

I’ve numbered this plan so that what I’m talking about in the text makes a little more sense.

Section 3 has a creek bed to finish and Rundles Mill is still just a cardboard mockup that was painted grey for the one exhibition Morpeth has attended in 2013. I would guess that there’s probably 6 months work is left in section 3 at my usual leisurely pace. However its section 4 that is yet to even be started and the amount of time I need to complete it is anyone’s guess. This section of layout is going to be formed from a base provided by recycling the present train turntable/storage roads which I have decided can be re-made with a much narrower cross-section allowing me to fit the entire layout in the trailer for transport (including section 4). Until the present plan to re-arrange the layout was developed I could never work out how to fit 5 sections of layout (section 5 being the train turntable) into a trailer with only four slots available. I think I’ve solved this problem but we’re all going to find out whether it’s a workable solution over the next 3 weeks when I finally start on the work to recycle the turntable and make a start on the base for section 4 which will house the pier and ship models. My reasons for being fairly vague about how much time it will take me to complete section 4 is that it has a whacking great ship on it and as I’ve never built a ship model before I’m a little unsure about the amount of modelling time this is going to consume.

It took me nine months to scratch build a loco, how long’s it likely to take to assemble a meter long ship model? 🙂

2 thoughts on “Finished! Really this time…”