It’s been a while since my last posting but I was on leave from work for a few weeks at the time and life gets in the way. One friend was prompted to write an email to me yesterday asking if I was ok. At least someone noticed I’d disappeared 🙂

I won’t claim any huge progress on the 20 but a significant phase has taken place over the last few weeks in that I received in the mail my new riveting toy from the UK and I’ve riveted up a panel for one of the side tanks. That’s the only modelling I’ve been able to do over the last few weeks however today I took some time to trim the overlay to size and solder it to one of the tanks. 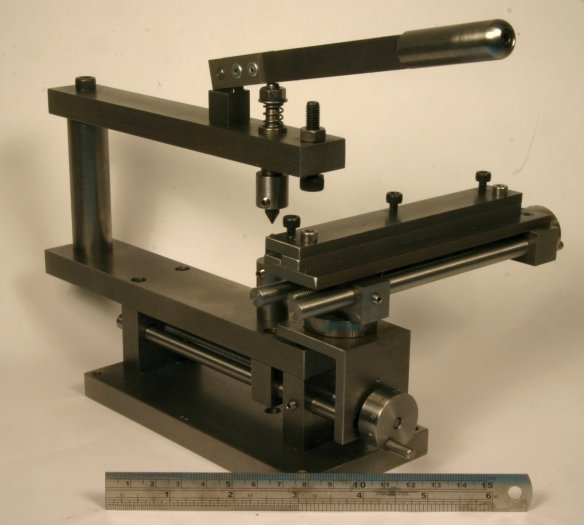 This is a photo of my new riveting machine which arrived in the mail from the UK a few weeks ago. It’s a lovely piece of kit but poisonously expensive due to th mailing costs. My recommendation? Buy one when your currency is flying high as was the Aussie dollar a year or so ago, not when it’s down as it is at the moment. I spent something 60% of the purchase price on mailing costs.

The riveter is from GW Models in the UK. They don’t have a web address nor email and don’t accept credit cards. Luckily I have a friendly pom who let me use his bank account to transfer the money otherwise I’d have been up for the cost of the international bank cheque too. In spite of all these issues this machine is an order of magnitude on from what I’d been using up till now and in my opinion it, or something like it, is mandatory for the budding scratch builder. You wouldn’t buy one unless you were planning on getting some use out of it and I have plans, so many plans… 🙂 The major advantage of it is the relatively accurate X and Y table with dials calibrated in metric measurements. The photo shows the 7mm version which if memory serves is about 170 pounds. Postage was about 80 pounds and it weighs approximately 4.5kg. Ouch! But I’m in love and love is blind 🙂 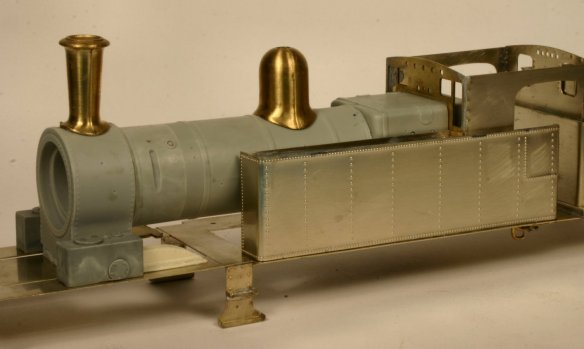 I will need a little more practice and I did one experimental test piece that ended up in my ice cream container of off cuts and dud NS but I’m very pleased with the result.

I cut the second test piece to size this morning and soldered it to the tank blank and this is how it came out. The rivets are on .010 NS sheet and set out to a pattern that is from the Greg Edwards sheet. They are crisp and clear and best of all, straight. It gets a little boring sitting there rolling the wheels and pressing the handle but generally speaking the only thing you have to think about is whether you need to turn the little wheels one turn or two. Being able to rivet lines at 90 degrees to another line without having to remove the workpiece from the machine makes this machine worth most of the cost.