I spent some time with a friend at the AMRA’s Brisbane model train exhibition yesterday. This is about the fifth or sixth of these shows I’ve been to as either a visitor or an exhibitor and I must admit I’ve watched with interest the problems the organisers have faced with venues over the last few years. It was held at Doomben race course for the last couple of years and, as is the way with these things, this venue seemed to have suited some and not others as it was on multiple levels reached by escalators. I only attended the shows at Doomben as a visitor, I didn’t go as an exhibitor, but I can’t say I envied people having to lug their stands to the 2nd storey of the venue. This year the exhibition was back at the exhibition grounds but it was held in what is essentially an enormous tent. I kid you not. A few friends I spoke to who did have exhibits there said that access was fantastic as the venue allows the walls to be rolled up and you can drive your can/van right into the interior for unloading. However the floor is essentially a car park and as such, is very uneven. One layout owner I spoke to had his layout choked up on small blocks of wood he’d cut up on Friday afternoon after visiting Bunnings! The drop from one end of the layout to the other was something like 250mm! And it wasn’t a very big layout. In spite of this all the layouts had trains running and there was a long of people outside waiting to get in so I reckon the show is likely to be considered a success. It was busy! For me the two stand out layouts at the show were Rob Ritchie’s Gilbert Sidings and Bullenburg Creek. Rob’s layout is a small 7mm SG shunting puzzle and he’s made explicit use of the ideas I first saw used on a Tasmanian layout that appeared at an AMRA Sydney show a few years back. The layout has a black backdrop and it’s lighting is focussed on the spots the builder wants the viewer to see. Rob started building this layout in February this year and has brought it to a fantastic level of completion in that time. I know he’s been busy with it because it’s been ages since he’s rung me to talk on the phone 🙂 Allen Tarrant’s Bullenburg Creek is a beautiful HO NSWR layout set in the Riverina district of NSW. It reminded me a lot of the fine work by that master modeller Rodney James and also had a passing similarity to Graham Holland’s 1:43.5 scale layout Binnabri. It’s the first time I’ve seen either of these layouts and they were well worth the drive north, even though my navigator got us lost on the way back south! 🙂 I’ve done a little more work on the coal hopper this week, adding couplers and picking out the metal strapping in black paint. This painting was an experiment to view the effect as this colouring appears in the prototype photos of Muswellbrook colliery wagons. I’ve also have a suspicion that I got the load decals wrong with these wagons holding a lot less than 16 tons, but I can always fix this later. 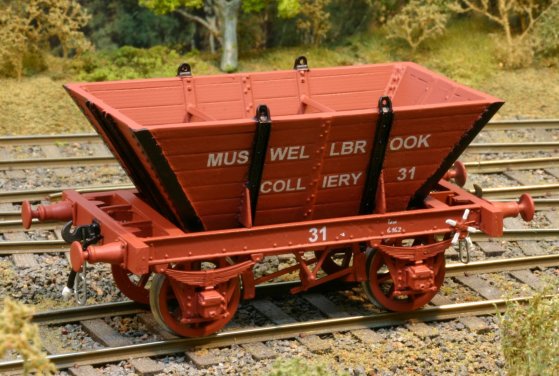 I still need to finish off this wagon with some weathering and rust but I do like the strapping picked out in black which more closely matches the prototype photos I have.

I met Ian Phemister yesterday who was working on Bullenburg Creek. He’s building a layout based on Muswellbrook in HO. He and I had a natter about Muswellbrook coal hoppers and he mentioned he has a plan of the longer wheel based version of the hopper that carried 12 tons. He promised to send me a copy of these plans at some point. As I would like to investigate scratch building at least one of these wagons this information will come in very useful. Thanks Ian.