Well I finally managed to snap a couple of shots of Pioneer tonight as she’s now in a condition to be photographed. Things were going along quite well till a couple of weeks ago when I had a small accident and dropped the body the loco. I caught the edge of the roof uprights with the chassis and it fell about 700mm from a shelf onto my workbench. No great harm done but it did cause a bend in the footplate and a couple of details came loose. Then the old Soundtraxx DSD decoder didn’t want to cooperate so John P helped me out and I got a new decoder installed and working over the last few days. 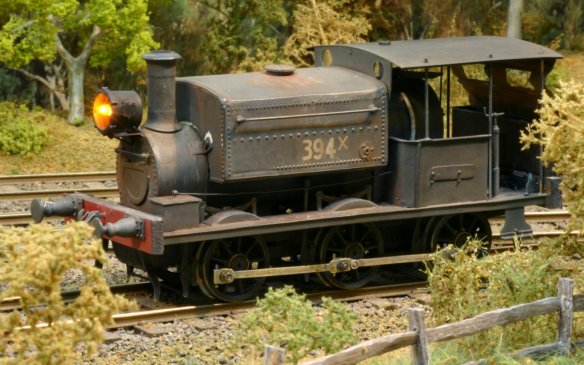 A quick shot showing the headlamp working. If you look carefully you can see the damage to various spots. I’ll work on repairing this damage over the next few days as time permits.

I’ve commenced working on re-assembling the loco and repairing damage that has been caused during the rebuild and fixing some minor problems that are left overs from the original build. For instance the tank never sat level on the original build so I spent an hour tonight plugging the screw retaining holes on the tank and re-drilling new ones in slightly different places so the tank now sits parallel with the footplate, although after dropping and bending it I’m not completely certain that the footplate is actually straight. One problem I can’t fix at this stage is the level the loco: it leans quite plainly to the front and this is really made apparent in photos I’ve taken. Thankfully it’s nowhere near as apparent when viewing the loco live and to be honest Pioneer is meant to be old and run down: if she’s a little unsteady on her wheels then I’m ok with that 🙂 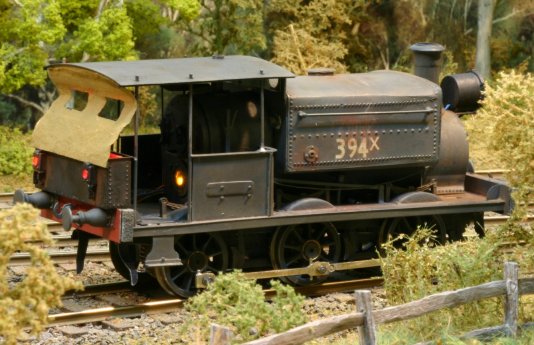 You can see the red glow of the LEDs in the coal bunker in this shot. This will be remedied when I install a coal load on top of the bunker. After the damage done to the old coal bunker from the action of the real coal I used in the original build this time I will glue the coal to a piece of black styrene and allow this to dry as a separate item. Only when it’s dry will I lightly tack this detail in place with some PVA.

However in spite of these trials and tribulations the key feature of the rebuild is the quality of the running I’m now getting in comparison with the old chassis. I suppose this is a slightly unfair comparison as the loco didn’t actually run before I started work and now she does so anything is going to be an improvement. However in spite of this I think I can safely say that Pioneer is running better than she ever has. In this sense I’m comparing the running qualities she exhibits now to those when she first took to the rails about 10 years ago. The new decoder is partially responsible for this because it’s an SR decoder and is pretty much silent plus it has a smoothing capacitor so the poor little loco doesn’t come to a shuddering halt every time she encounters the slightest speck of dust. However the sprung horn-blocks and the new pickups are also playing a role in getting her running sweetly. So in the end I’ve achieved what I set out to: a loco that runs smoothly and has a little bit of animation in the form of some lighting effects. So now I can pack her away for another 8 years until I need her to run on the pier of Morpeth 🙂