From the start of my work on Morpeth I was fully intending to install a 60′ turntable I had purchased a number of years ago. This was a good visual representation of a NSWR 60′ table and as it would look at home at a location such as Morpeth I considered it well worth the money I paid for it. I won’t name the company who produced this turntable, anyone familiar with the modelling scene in NSW would be well aware of the company I’m referring to. Especially those 7mm modellers silly enough to buy one along with muggins because the truth is that everyone I know who owns one has had the same problem as me trying to get the thing to operate reliably, or to operate at all. 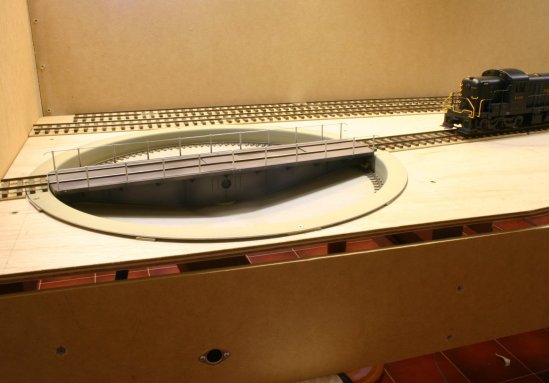 I’ve deliberately chosen this early photo to let you get a good look at the turntable in question. No pretty scenery to doll up the scene.

I’ve done a bit of tinkering with the turntable and I think I can get it to operate a bit more reliably but to be brutally frank, I shouldn’t have to! This thing cost me well over $AU700 and for that sort of money it should work reliably for years. I’ve barely managed to get the thing to turn a full circle more than once in the time it’s been on my layout and in this sense it was barely used before my plans changed and I uninstalled it from its position on Morpeth. This is not a toy and its price reflects this and as such it should work and it doesn’t! And all my friends who have them have had exactly the same experience: about 6 of us in total! I had assumed that this was confined to the O-scale version of this brand but then an acquaintance recently told me that exactly the same thing had happened to him with the HO version he had of the table and that another modeller had two of them sitting installed on his HO layout, neither of them operated and they were static displays.

The problem for me is not so much the inoperability of the turntable I have but where I can get one that operates for me the way I want it to: namely with a high level of reliability and accuracy? I am slightly less worried about the exact prototypical look of any turntable I use but it must operate. A few weeks ago a few planets lined up and I bit the bullet and purchased a 24″ turntable from Millhouse River Studios a US outfit who claim to make the Humvee of O-scale turntables. At 24″ this table is more like a 90′ NSWR table than a modest 60′ model but to be honest I really don’t care. As long as the thing works and accurately puts my locos where I want them I’ll live with it being a bit big and not quite having a prototypical look.

The table I’ve ordered has been made and is at the time of writing in Florida, on its way to MyUS, a company that batch ships packages in an attempt to avoid extortionate US postal charges. I’m not sure why this works in keeping costs down but I’m assured it does. I’m expecting the package to arrive in the next week or so, all 38lbs of it. That’s about 17 kilos! The thing must be made from iron 🙂

For me this purchase is a bit of a watershed as it means an explicit move away from the gentle, quiet world of branchline modelling I’ve been in for the last 15 years. You don’t use a 75′-90′ turntable to turn Manning Wardles. Does this solidify the move to modelling a location like Muswellbrook? To be honest I’ll really have to wait and see about that. The reason for the purchase had more to do with a little money coming my way and an attempt to beat the plummeting Aussie dollar than it did with taking on a new modelling challenge. However, as I said in my post on the idea of modelling Muswellbrook a month or so back, I really don’t buy locos to sit on a cabinet display shelf, I buy them to run on a layout. As so much tempting stuff has been coming onto the market recently in kit and rtr form, I feel like if I’m going to own them, I really need to build somewhere to run them. But I also want somewhere to turn them! 🙂

2 thoughts on “In A Spin Over Turntables”