Before I get too deeply into this pre-christmas missive I’d like to wish those of you who are regular readers a merry Christmas and hope that you’ve been good enough for Santa to drop something hobby related under the tree for you. A friend told me the other day that he’d bought a loco kit so his wife could give it to him for Christmas. Now in my opinion that’s a good idea!

Quite a few years ago, when I was still modelling in HO, I built a layout in a shed called Trundlemore. This was at a time that was very much pre-digital photography so I don’t have any photos of this layout that I can easily share, however I do have one taken of a layout I helped build called Upper Hunter and this layout was the recipient of a section of Trundlemore so this will have to work as a stand in to give you an idea of the way a part of the layout looked. 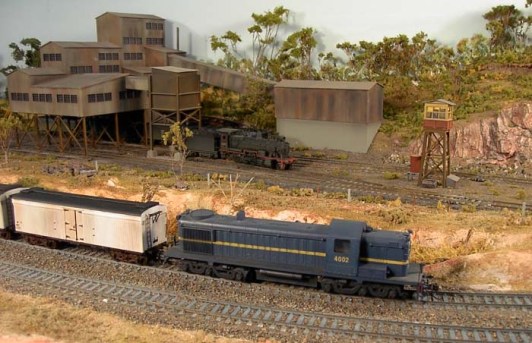 This is a shot of Upper Hunter, the layout built by the Wyong & District Model Railway club. The coal mine was recycled into UH from my layout Trundlemore after I tore my layout down. Everything behind the double mainline is pretty much directly lifted from Trundlemore. The locos are mine too if I’m not mistaken.

Trundlemore was quite a simple concept in that it essentially represented a yard with two wings extending from either side: at the end of one wing was a turntable/roundhouse scene and at the end of the other was a coal mine scene. Trains rounded a corner, entered the yard and then exited the layout at the other end of the yard. There was almost no plain track running through empty scenery and this is a pattern that followed me into my O-scale layouts: all three of my small O-scale layouts have essentially been all yard and no landscape.

The reason I mention Trundlemore is because this layout has been on my mind recently as I’ve worked through a range of options and possible concepts for my new “permanent” layout. No one need fear that I’m contemplating a switch back to HO, I’m far too deeply in love with O-scale to ever seriously consider a major project in the smaller scale. Having said that however I recently purchased my first HO loco in over a decade. This loco may never be used on a diorama or layout but instead will probably wind up in a glass display case; the same display case I’ve vowed will never contain any of my O-scale locos. I’m a runner not a collector! 🙂 The reason I’ve had Trundlemore on my mind is that, as I’ve narrowed down what I can achieve in O in the space I’m likely to have available, the outcome has increasingly come to resemble Trundlemore in concept and operating procedure. My new layout room is likely to be something like 50-70% larger than the space I had available for Trundlemore so it shouldn’t come as any surprise that what will fit is likely to be conceptually similar. I haven’t set out to plan to re-build a layout that mirrors something I tore down about 15 years ago in a different scale, but as I’ve worked on what I’d like to achieve with the new layout it turns out that many of the same conditions apply:

1. I tend to be a one man band so any layout I build will need to be achievable by me working alone, even if that’s over an extended period of time.

2. I don’t want to spend endless hours building rolling stock kits. I’m ok building kits, after all one of the reasons I work in O-scale is because it requires the modeller to build things. However I’m not what I would describe as the world’s most enthusiastic rolling stock modeller so the idea of spending a large percentage of my time building up a huge roster of models simply doesn’t appeal to me.

3. I want plenty of opportunities to make structures for the next layout. I don’t mind looking at open countryside but I don’t really want to model too much of it. So a single yard with a short length of track either end running into a fiddle yard will suit me fine.

4. As I’ve said before I’m a runner, not a collector. If I build or buy a loco or loco kit I want to run it in an appropriate setting with a reasonably accurate consist.

5. What I do like modelling is urban railway and industrial infrastructure: factories, industrial sidings, roundhouses etc, with bridges thrown in for good measure. The problem is that these are often built on a massive scale in urban environments and this becomes all the more acute in O-scale. I find myself looking for an urban/industrial setting but without the sheer scale an urban setting implies. I’m looking for a railway setting that is large enough to be a natural setting for the larger locos that I’ve acquired in the last 5 years but not so large that I would need a football stadium to model it. 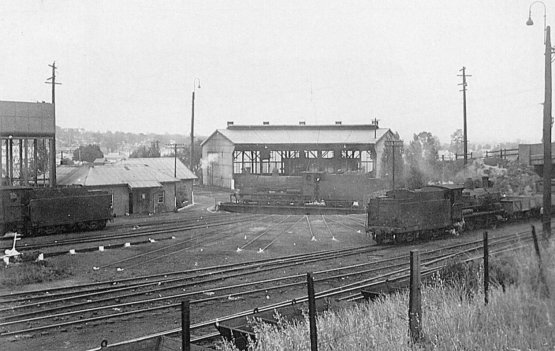 This is a shot of the roundhouse and 75′ turntable at Muswellbrook. This infrastructure was all still in place until quite recently before some government vandals decided to tear it down.

Over the last few years I had been gradually acquiring (or have on order) a number of locomotives that would never be at home on Morpeth. I’ve been modelling Morpeth for over 10 years now and have been quite happy with the outcome of this modelling activity. However I have to admit that the developments in my chosen scale over the last few years have made it extremely tempting to step things up a bit when the next iteration of Morpeth is complete. I made a critical decision a few weeks ago that I wanted to be able to turn my NSWR 38 and 36 class locomotives on a turntable and that the 60′ model I own would not be large enough to handle this task. I also made the decision that if I was going for a larger turntable then I would need a prototype location to accommodate this and this would imply a large step up in operating intensity. The locations of most 50′ & 60′ turntables in NSW were at the end of branch lines: the problem for me is that I’d been working in branch line mode for 15 years and I wanted something a bit more ambitious! But I didn’t want to get so ambitious that I couldn’t build this layout largely on my own. 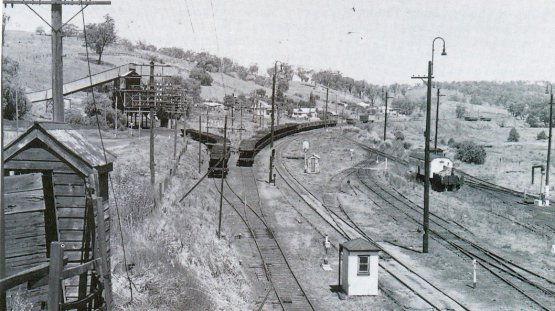 This shot shows one of the collieries dotted around Muswellbrook and surrounding district. This one happens to be within spitting distance of the turntable. This photo would have been taken from the road over bridge that can been seen in the previous photo.

Don’t get me wrong, Muswellbrook is big! And the chances of me getting anything approaching the full prototype yard into my layout space is zero. However no one ever said you can’t compress things a bit (or a lot) and I have a fairly good concept worked out that focuses attention on the loco facilities rather than trying to reproduce the full yard. How this will interact with the mainline remains to be developed as a concept, however I know I can get a representation of the loco facilities into a reasonable space so this is a good starting point.

This is not a layout plan. Rather it is a cleaned up scan of the loco facilities from a NSWR track diagram of Muswellbrook yard. This is in scale: I counted up the dimensions indicated on the original diagram and converted them into scale dimensions. This facility could fit into a 7m long room as indicated at the bottom of the page.

I haven’t yet reached the stage where I want to draw up a scale track plan of what I might get into the space I’ll have available, this will come later. What I wanted to know is whether I have anywhere near enough room to get the centrepiece into the space I’m likely to have available. Who knows, I might have more or less space available after the room is built. However unless I can be fairly certain that the main focus of the layout will fit there’s no point in continuing. Having worked out that I can fit the loco facilities into my available space, I can use a bit of judicious squeezing to par this down to what might work in a model railway. I want this to be more than a static display of my locomotive fleet, I want this layout to be conceptually connected to a railway that exists beyond the walls of my layout room.

Who knows, maybe I won’t have to decide between the display case and becoming a nut case 🙂

2 thoughts on “Glasscase or Nutcase…”