I got back from the AMRA’s Liverpool (Sydney) exhibition this afternoon after driving for 900km over two days. Long gone are the days when I could do a 10 hour drive in one go. I spent Sunday night in a motel in Taree about 4 hours north of Sydney and decided that it was about time I dropped down and investigated the Taree industrial branch that runs across the north of town. I took a few minutes to drive to the other side of the abandoned rail line that runs to a diary siding and took a few photos of the derelict building and loading docks.

I had to duck through a hole in the fence to get to this spot a take a few photos. Only after this did I walk along the fence line and discover that the old gate that used to allow rail access was wide open. This type of rail industrial archaeology is just about my favourite part of the prototype aspect of the railways. I find it far more interesting than locomotives and rolling stock.

I’ve driven over the road over bridge that crosses this part of the rail line quite a few times, especially before the Taree bypass came into use, and have often looked down at this building. There are more buildings further down the line and driving down there I found an extensive collection of old, rail served industrial structures. Some of these buildings were signed as being a fishermans’ co-op and they sit down near the Manning river. I didn’t have time to photograph these buildings but I’m certainly going to go back and photograph and investigate further. I think one of the things I find frustrating about period photos of railway subjects is how little of this type of infrastructure made it into photos. I realise that the vast majority of railway photographers were first and foremost interested in the objects that ran on the rails and this is why most photos are filled with trains. However as a railway modeller I spend at least as much time on the buildings and many other objects that sat beside the line and all too often a decent view of a fascinating structure, especially one I wouldn’t mind modelling, has a dirty, great locomotive or a line of rolling stock in front of it blocking the view 🙂

In spite of this side trip down a long abandoned NSWR branch line the reason I was travelling over the last few days was to attend the Liverpool exhibition. I always enjoy catching up with friends and giving the plastic a bit of a workout over the Oct long weekend. I spent some time on the Aus7 stand on Saturday working on an O-Aust CV wagon kit and the rest of my time seemed to be devoted to talking and shopping. I really should thank Chris for organising the stand this year and thank all those members who dropped in and did a stint. I should also mention that Arakoola received an exhibitors choice award and Model O-kits received an award for best commercial stand.These awards were well deserved and recognise all the hard work those responsible put into their exhibits.

A shot of Paul Chisholm making some running repairs to a model out the back of Arakoola. He must be enjoying himself because he’s smiling. Paul doubles up in his free time as the editor of the Aus7 magazine 7th Heaven.

The Aus7 stand was squeezed between these two stands but we didn’t win anything, that is if you don’t count signing up the GOG’s Australian representative for a years membership as a win 🙂

Just as I was about to hit the road I got into a deep discussion with a friend and long time member of the Aus7 Modellers Group. I’ll call him “Trendy” to disguise his identity. He’ll understand the reference. As is Trendy’s habit he tended to get into my ear about the state of O-scale modelling in NSW and he made some valid points about the somewhat small numbers of modellers who take up the scale and who attend the Forums we regularly hold at North Sydney Leagues Club twice a year. One of which is coming up in a couple of weeks. 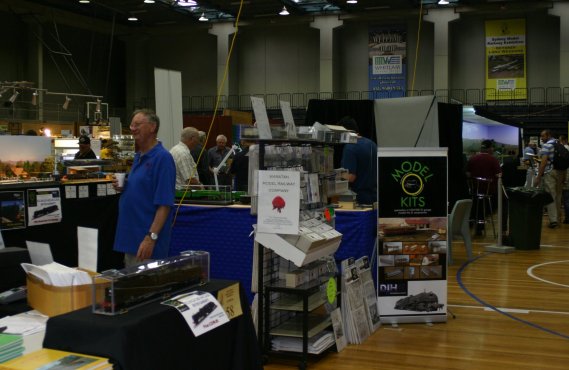 A view down the “O-scale Arcade” with Model O kits in the foreground and Arakoola in the distance. The Aus7 stand was squeezed in between. “Squeezed” being the operative word, hey guys? 🙂

Now I share Trendy’s concern about the numbers in this scale and the relatively low attendance at our Forums. We would always want more people rather than less. However I had to dispute any conclusion that this meant O-scale was in some sort of crisis or decline. As we were having this discussion we were standing on pretty much the same spot that the photo above was taken from. I can remember the AMRA Liverpool exhibitions of the early 2000’s when there was virtually no SG, O-scale representation at all. As we were discussing the state of the scale we were standing in front of approximately 35m of O-scale “content” and this was certainly not the only part of the exhibition that was devoted to O. The Berg’s stand had a small O-scale layout at one end of there stand and of course there was also “mild-mannered” Pete Krause in his O-Aust “phone booth” having money thrown at him all weekend 🙂

O-scale may not attract a huge number of modellers to its ranks but I think it is now a “mainstream” scale. Let’s face it, it is still very expensive to take up modelling in this scale. However it remains an extremely attractive scale to work in and while it may not have “arrived”, it is going somewhere. I’m not sure where that “somewhere” might be, but then I’m too busy having a good time modelling to do too much worrying about it. Just like beauty, I suppose success and growth are all in the eye of the beholder.

Chris Lord and Kim Mihaly taking a short break to allow me to photogrpah them in front of the Aus7 stand.

1 thought on “The Eye Of The Beholder”