My partner and I had a long talk about the plans for our new home this afternoon: well to be entirely honest we talked about her plans for a house and my plans for a train room with some sort of dwelling attached. I’ve managed to convinced her that “yes, I really do need all that space”. Afterall, any ground not covered by building is just more lawn for her to mow! 🙂

I’ve been doing some thinking about a post on Trevor Marshall’s Port Rowan blog a couple of days ago where he talks about keeping a layout simple and achievable. I might have a couple of years up my sleeve before I need to start making decisions about the type of layout that will end up in my new train room but that doesn’t stop me putting some thought into the topic. Now I’m a fairly confirmed believer in the idea of keeping layouts simple and achievable, however I’m also willing to admit that I’m as subject to “visions of grandeur” as anyone else.

In planning the layout that would have been built in my current train room I had settled on a simple connecting line that would join up my two pre-existing portable layouts; Queens Wharf and Morpeth. I would like Trevor to believe that the main reason for choosing to keep it simple was his sage influence on my track planning but I’ve got to admit that this only really played a minor role. Just as Ray Pilgrim demonstrates in his blog Bylong, when mentions his daughter coming back to live with he and his wife with two ankle biters in tow, life can’t be planned. The primary reason I kept my layout plans simple had far more to do with my mother’s health than it did with any high-minded layout design ideals. I made the decision to get the room lined and painted a few months ago after many years of procrastinating and made a start on building the layout. I had made the assumption that I’d get a few years out of the layout room – surely enough time to get a few metres of rack laid and some trains running – until the two women in my life did things that surprised the hell out of me. A month ago I was making pleasing progress on my new layout but within the last two weeks my personal circumstances have done a 180 degree about-face and I’ve decided to sell my home. Normally I would refuse to say “such is life” (mainly because I’m no fan of Ned Kelly) but the problem is that occasionally it’s true! 🙂

So I face the prospect of a larger layout room: what am I going to do with it? Well perhaps it might pay to remember the name of this blog is Morpeth in O-scale. While 8.5mX5.5m might sound like a lot of space, in O-scale it’s really not that much acreage. It’s way too early to plan anything in detail but this space does offer me the possibility of one thing that I couldn’t fit into my previous space and that is a “tear-drop” peninsula down the centre of the room. This feature on its own would offer the possibility of trains actually going somewhere, as opposed to the present situation where the locomotive almost arrives in one yard before the brake-van has left the previous one. In spite of such a feature pushing the Morpeth line out of the “simple and achievable” category of layout design it is a very tempting prospect and quite high up the list of desirable inclusions.

Possibly the most appealing feature of being faced with more space is the possibility of two scenic features that I was struggling to cram into my current layout room’s plan. What I would have liked to get into the plan that would have been built, prior to the change of circumstances, was at least one large bridge. I won’t try to define what constitutes a large bridge because they are pretty much all large in this scale however I will say that I would like it to be bigger than a drainage culvert and smaller than the Sydney Harbour Bridge. A steel truss design has a certain appeal. The other feature I would really like to find space for is a substantial pier scene.

It may be that meat is being loaded (or unloaded) in this photo but if those boxes in the left foreground aren’t butter boxes (probably Norco) I’ll eat my hat.

There are a couple of photos of ships being unloaded (or loaded) at NSW ports that I have in a folder on my computer that inspire my ideas about what I’d like to achieve with the modelling of a pier scene. Even though the “Meat Loading Newcastle” photo above depicts a scene that in O would be well outside of my available space, I could do a small slice of this type of scene, afterall Morpeth was a port! The photo of Dalgety’s pier at Darling Harbour below is far too substantial to offer any real prospect of it being modelled however it is the detail and atmosphere that keeps drawing me back to this photo. Absolute waterfront magic! 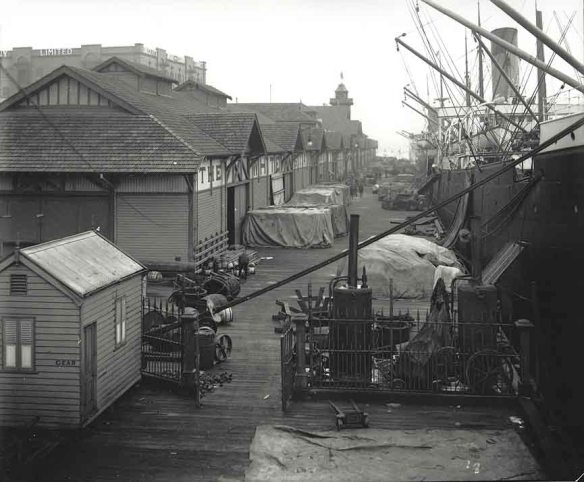 I find this photo absolutely fascinating. The jumble of detail, the buildings and the ships are just crying out to be modelled.

Even at this stage I can foresee that I probably won’t be able to have both a central peninsula and a wharf/pier scene on my next layout + a substantial bridge. The choice of what to leave out is going to be excruciating 🙂