This afternoon I started working on the last of the modules that make up the two small layouts I have built over the last 10 years. This module is the smallest and I suppose could be described as the station module of Queens Wharf. When I started the process I had in my mind the intention of setting up both layouts in my train room in a way that would allow me to run some trains back and forth along the line in the format that I find most appealing, namely a point to point plan with a fiddleyard at one end and a terminus at the other. I find this appealing for the reason that this is the way railways operate in the real world: trains enter onto a line, they run to the end of it and then they turn around and run back down the line.

Now theory is fine but none of us is immune from ambition: given the time, space and resources who among us would resist the temptation to make our mainline a bit longer, our model buildings a little larger and our scenery more spectacular? I can draw a length of track on a plan to join two yards but this two-dimensional exercise removes me from the echo chamber of the floor space of my train room. The visceral experience of standing and working in the available space triggers ambitions to make improvements and to maximise the modelling potential of the process.

Yeah, yeah, that’s all just a fancy way to justify the fact that I spent the afternoon ripping into Queens Wharf by doing a bit of crow bar modelling 🙂

This photo shows the results of the judicious application of that common modelling tool the crow bar. This is the rear side of the station module of Queens Wharf with the backdrop and the entire rear scenic section removed.

It must be over ten years since I had installed the scenery on this module and I had no memory of how it was attached to the benchwork. It turns out that the complete slice of scenery was sitting on a sheet of 3mm MDF and this had been secured to the cross members by the use of two panel pins per beam. When I started to investigate the possibility of getting the station off without damage it almost leapt into my arms. 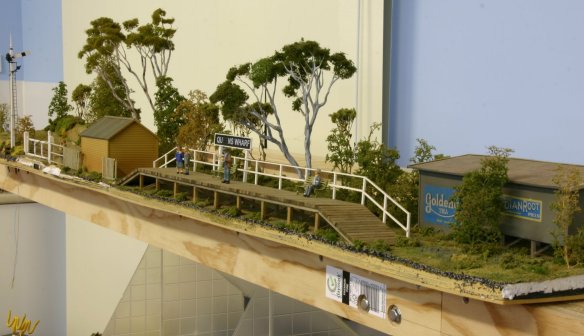 I placed the slice of QW’s scenery on the benchwork so that it was safely out of the work area while I took this photo. This is not where the station scene will end up when it is re-installed on the layout.

I started work on the layout this afternoon with the aim of removing the fascia and backdrop from this module. I also wanted to investigate whether I could get the station and surrounding scenery off the module without damaging it. By the end of the day I’d made a series of commitments to the way my new layout is going to look and operate.

1 thought on “Decision Made”