One of my favourite television programs is a US show called This Old House in which a bunch of blokes tear down and then rebuild someone’s house for them over about 10 weeks of episodes. One of the main personalities in the show is a bloke by the name of Tom Silva who is the building contractor in the show. Tom is a very clever man and one of my favourite sayings of his is that “ya gotta destruct before you can construct”. Well I’ve been destructing my layout over the last few days in the hope that one day I’m going to be able to construct something new and improved in its place.

I was pretty sure that having the layouts set up in the train room would help to clarify the plans I had been formulating for the new permanent layout that I’ll work on over the next couple of years and this has turned out to be accurate. I knew the basic outline of what I wanted to achieve in the available space but after weeks of doodling with plans I just couldn’t make it work to my satisfaction. The folder I keep the plans I draw in has 12 files in it. That’s 12 different versions of a plan that will essentially be a single line of track joining two pre-existing layouts! The problem stemmed from my own requirement for a fiddle/storage yard of some sort. I kept telling myself that I could live without off scene storage but the reality was that I couldn’t convince myself to believe this.

About a week ago I had both layouts up on their new bench-work and I was sitting looking at them while I gnawed away at the same fiddle-yard bone when I had a small light bulb moment: if I couldn’t get the fiddle-yard to fit on the end of Queens Wharf because of the stairs, why not flip the operating scenario 180 degrees and place the fiddle-yard on the end of Morpeth instead. All this would require was a small hole to be knocked in the wall and the turntable to be re-located to Queens Wharf. It would also mean that the stations were in the wrong order but then I never was too caught up with the need for exact prototype fidelity, so what the heck?? There was an almost audible click when this idea came to me. It solved about three problems in one fell swoop, not the least of these being that the 60′ turntable at the edge of Morpeth yard was giving me a real headache and I had decided that I needed to pull it out to take a proper look at it and come up with a fix. If I couldn’t fix it I was planning on taking it down the local park and using it for frisbee practice! 🙂 As I was going to have to pull it out to move it I decided this may as well happen while it was in transit to its new location. I did some work on the turntable yesterday, and I think I’ve sorted out the problem, but it really needs a test in its new location before I decide I’ve addressed the problem permanently. If the turntable was exiting to stage QW, then the engine shed could be moved to a more logical place, namely the space vacated by the turntable. So out came the engine shed and it now sits on the sidelines waiting to be relocated. 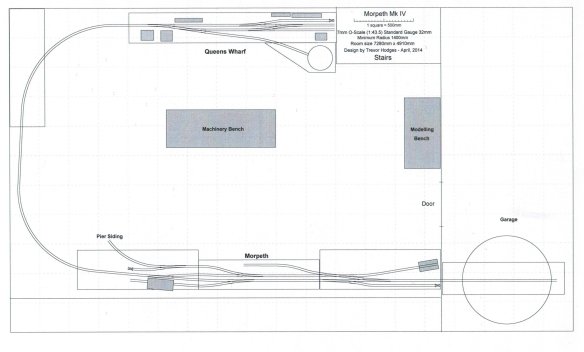 This plan shows the track arrangement I’ve finally settled on. The extension into the garage is portable and will only be in place during operating sessions. Morpeth’s train turntable will be pressed into service in this spot but it will still be available for exhibition use on the odd occasion when Morpeth makes a public display of itself. The builder was called back in the other day and he’s going to cut the small hole in the wall that this plan requires in about a week.

I had pretty much the whole day to work on the layout so I got stuck in. After putting the locomotive turntable back together I got to work on modifying QW to allow it this to be fitted in its new location. Approximately 80% of the changes are on the goods shed half of the layout. This half is having a new point laid, the loading bank removed, a new goods siding laid with a yard crane, a new backdrop and about 500mm of extensions “cut & shut” into the track plan. I spent the first hour pulling out electrical components and wiring that were cluttering up the underside of the layout. It was a bit of an archaeological excursion to be honest. I found the remains of several past electronic schemes that had been installed gradually over the years. It’s a wonder the layout ran at all! 🙂 Once I’ve gone through the same process on the other half of the layout and laid all the new track, I’ll come back and completely re-wire the whole layout to the same standard as that on Morpeth. This was going to be needed even without changing the location of the locomotive turntable.

After the wiring was basically reduced to a shadow of its former self I pulled the detail off the front side of the module I and pulled up the goods line that ran to the loading bank, which came out with a bit of gentle persuasion. I cleaned up and then began installing the new bench-work. I had already installed the extensions for this section but today I added a small box like extension to the front of the layout for the turntable to sit in. I also had to rework the backdrop I’d installed the other day when some friends were over to give me a hand. Thanks guys! 🙂 After everything was installed I managed to lift the layout back into place on the new benchwork but not before reinstalling the lighting fixtures I’d had to remove when I pulled off the old backdrop.

The next step will be to build a new point for the goods line and to lay all the small sections of track that I’ve made room for. I have most of the materials on hand that I need to build the new section of benchwork for the track that joins the two layouts but I’m running out of time to make a start on that before the end of the school holidays. Still, being able to choose what you do and the order in which you do it is one of the great joys of this hobby isn’t it?