I spent some time last weekend sitting in my train room contemplating the progress made by the builder working on lining and finishing the room and thinking about what I was going to do with the space once it becomes available to trains again. At the time of writing the first coat of undercoat has gone on so things have progressed fast enough to allow me to think I might be able to start shifting some gear back in as soon as this weekend. So after something like 10 sometimes frustrating years of thinking about this moment, the time has come where I have to actually make some decisions, not just toss ideas around. Of course I could come back after I’ve shifted all my gear back in and change things around but I know myself well enough to realise that once an item comes to rest in a particular spot it tends to take up permanent residence. So I’m making decisions now that I may have to live with for a while and as this is personally a quite significant moment I’m enjoying taking my time and mulling things over this week while I’m away from home and not in a position to put any plans into action.

This shot shows progress on the room as of last weekend.

Is there any more exciting time in the hobby than having an open space to build any layout you want, especially when you’ve thought about it for a good deal of time? So what am I going to do in this field of dreams? I’ve been back and forth on the topic and probably the biggest decision concerns whether to build a layout with a continuous run or something in a point to point style. The room still needs to share space with some of my tools and workbenches: I’ve managed to shift out of the room items of furniture that had prevented me using it predominantly as a layout space up till now, but it isn’t a space that can be entirely dedicated to a layout. I’m happy with this, I like working in the room where I run my trains. In spite of the majority of my friends who I’ve shown various plans to being in favour of building something with provision for a continuous run, at this stage, I’ve decided to build a point to point layout which incorporates both of my transportable layouts, Queens Wharf and Morpeth. I did seriously contemplate something a little more ambitious that would allow me to run longer trains in a circle but I’ve had that type of layout in HO and to be honest the novelty always wore off for me pretty quickly. A second consideration is that I can’t be certain how long this room will be available to me so I figure that putting something a little more manageable into the space will allow for a much less disruptive tear down if I have to sell my home a few years down the track. I keep saying that the next move may be the last one but I’ve recently changed my living arrangements again so why should the next few years leading up to retirement be any different? My partner may have plans too that may alter things, so cramming the room full of a layout that is overly ambitious seems like I’m asking for future headaches. 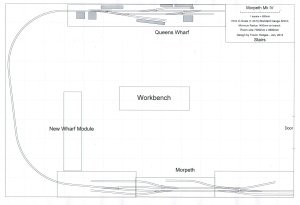 This plan is one I drew a few months ago. It isn’t exactly what will end up in the room but it is close enough to provide the flavour of what I will build.

I’ve included one of the numerous plans I’ve drawn over the months to provide you with an idea of what I’m going to do with the space available to me. The first step won’t be to jump in and start building the new layout, it will be to take some accurate measurements of the available space and then transfer these to my layout planning program. With new walls through having the room lined there will be slightly less floor space available than before. I learnt in building Morpeth that 50mm can mean a lot when you’re cramped for space, and you’re always cramped from space in O-scale. This plan states that the minimum radius of the curves in 1.4m. I’d like to have all my curves at no less than 1.5m and preferrably 1.8m when this is available. The problem with this aim is that there’s a pre-determined amount of space available between the end of Morpeth and the wall and I already know that this is less than 1.5m. So the minimum radius on the layout is already pre-determined by circumstances. I suppose I could junk 12 months work, rebuild the end module of Morpeth by tearing the bridge out, thus providing me with a bit more room but this isn’t going to happen so I will just have to live with a curve somewhere around 1.4-1.5m. Such is life 🙂

Now at this stage some readers may be saying “is that it? All that work and effort and all he’s going to do is add about 4m of plain, single line track that joins two layouts he’s already built?”. Well the simple answer is….yes! That is all I’m going to do with the new space available. But consider just a few of points:
– I’ve been working on this particular railway “theme” getting on for 14 years. This is my first real chance to have a train go along the line I actually model, the Morpeth branch, from one place to another rather than just shuffle locos and wagons round a yard. Bliss!
– Shifting from this bucolic branch line theme to something bigger with longer trains and heavier traffic does have appeal but as I pondered what I wanted to do I kept thinking, if I’d wanted that I’d have stuck with HO. Just because there are O-scale locomotives available now that fit into the “big power” category doesn’t necessarily mean I want to throw over 14 years of work and very satisfying modelling. It ain’t broke, why should I fix it?
– I am buying a couple of the bigger locomotives that have come onto the market recently and I’ve asked myself why am I doing this if I haven’t made provision to run them on my own layout? Well the first answer is that I like these locos as much as the next person and I look forward to the challenge of building something bigger than a Z19 or Z20 0-6-0. The second answer is that isn’t that what friends are for? I’m sure I can twist the arms of a couple of the Arakoola guys to let me run my locos occasionally. If I donate a lung or kidney that is 🙂 Seriously, the answer is that while I might enjoy building something a little different once in a while that doesn’t mean I have to abandon my main modelling direction.
– Finally, it’s worth keeping in mind that I’m essentially a one man band. I’ve been working on Morpeth for the last 4 years pretty much non-stop. While it was presentable for the Aus7 ExpO, it wasn’t finished. I’ve hardly built a single wagon in the last two years and my 19 class loco was built in 2011. I’m essentially adding the same length of layout again as Morpeth with this new extension. So I ask myself: if I add even more layout and then start finally putting together a few of those kits that are sitting in the cupboard unbuilt and I don’t have the motivation of an exhibition to spur me on, in which lifetime am I going to build this new layout with a continuous run?

What will eventually end up in my field of dreams will probably be quite a bit different from the above plan but it’s character will be essentially what is drawn there. The two small layouts will act as yards and end points of my point to point layout. I’ll probably struggle with some type of fiddle yard and cram this in somehow but even that may be left out. While I’d quite like to watch a long string of coal hoppers run around a layout behind a Garratt I would rather see a short train behind a Z20 trundle up the line. It’s an image of this type of train that usually sits above my modelling bench while I’m working and it’s recreating this type of scene that would be the culmination of 14 years work.

I can hardly wait!

5 thoughts on “Field Of Dreams”